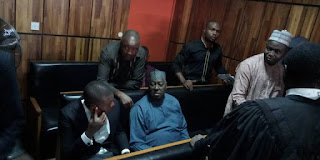 The immediate-past Secretary to the Government of the Federation (SGF), Babachir Lawal has arrived in court for his arraignment on alleged conspiracy and fraud.

He arrived in the company of operatives of the Economic and Financial Crimes Commission (EFCC).

It was gathered that the former SGF was arrested yesterday by the anti-graft agency.

Two senior advocates have already been sighted inside the court. One of them, Chief Akin Olujinmi (SAN), a former Attorney General of the Federation (AGF) and Minister of Justice, is expected to lead the defense team.

Lawal will be docked before an FCT High Court in Maitama to be presided over by Justice Jude Okeke.

The EFCC had filed a 10-count charge bothering on conspiracy and fraud against him and Hamidu David Lawal, Suleiman Abubakar and two companies, Rholavision Engineering Ltd and Josmon Technologies Ltd.

In the charge filed on January 30 by Offem Uket for the commission, Lawal was alleged to have conspired with Hamidu, a director in Rholavision and Abubakar, a staff in the same company, to fraudulently acquire a property and thereby committed an offence contrary to Section 26(1)(c) of the Corrupt Practices and Other Related Offences Act, 2000 and punishable under Section 12 of the same Act.

One of the charge accused Hamidu, Abubakar and Rholavision to have “abet the award of contract to Rholavision Engineering Ltd for the removal of invasive plant species and simplified irrigation to the tune of N6.4million by the office of the Secretary to the Government of the Federation (OSGF) through the Presidential Initiative for North East (PINE).”

Count 9 of the charge accused Hamidu to have “abet the holding indirectly of a private interest by Engineer Babachir Lawal in the award of a contract to Josmon Technologies Ltd for the removal of invasive plant species and simplified irrigation by OSGF through PINE to the tune of N272.5million.”

Lawal was also accused to have fraudulently acquired a private interest in the contract awarded to Josmon Technologies Ltd.

President Muhammadu Buhari had in October 2017, sacked Lawal following a report of investigations by a panel headed by Vice-President Yemi Osinbajo, into allegations of fraud levelled against him.