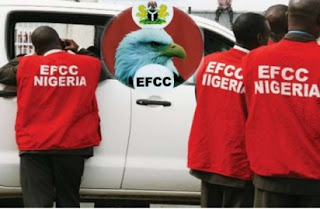 The Economic and Financial Crimes Commission (EFCC) has recorded forty convictions in the month of January 2019, secured across the Commission’s zonal offices.

He said this is followed by the Abuja office which got nine. Six of the convictions were recorded by the Port Harcourt and Kaduna offices at three each respectively. Kano recorded two, while Benin, Ibadan and Gombe offices had one conviction each.

He said notable among the convictions are those of the two former officials of the Independent National Electoral Commission, INEC who were sentenced to a total of 91 years jail term and forfeited their properties to the Federal Government.

He explained that the duo were found guilty of laundering N264.8 million in build-up up to the 2015 general election – a sum which was believed to be their share of the $115 million – illicitly dispensed by the former Minister of Petroleum Resources, Diezani Alison-Madueke.

He said another conviction of interest is that of a fraudster, named Ibrahim Suleiman, who defrauded the former First Inland Bank, now FCMB Plc of the sum of N400, 700, 000 (Four Hundred Million, Seven Hundred Thousand Naira).

He said, “The money was fraudulently diverted from an account domiciled in First Inland Bank to the convict’s account from where he transferred various sums to different accounts. He bagged 32 years jail term.”

Orilade said, “Also of interest is that of Adewale Dalmeida, a staff of Dangote Cement Group. He was sentenced to five years jail term for the diversion of nine trucks that were loaded with 800 bags of cement each, valued at N15 million each, which belong to his employer.”

He said among the convicts is one Efe Egube, a former bank manager in the defunct Oceanic Bank. Egube was arraigned alongside his company, Ocean Energy Trading and Services Limited, sometime in 2014 on a 19-count charge that bordered on obtaining the sum of N50, 049,000 by false pretence.

He said a man had pleaded guilty for collecting money for products not delivered by an online store called “Beat Classic Stores” created to sell shoes and bags online. He was sentenced to six months in jail.