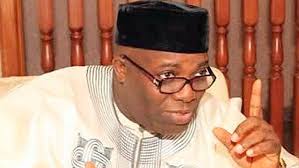 Dr. Doyin Okupe, who served as media aide to ex-presidents Olusegun Obasanjo and Goodluck Jonathan at separate times, says EFCC has started what he describes as “media trial.”

Okupe said the Economic and Financial Crimes Commission had released a press briefing on Thursday, alleging that he received N750m, whereas the issue was never mentioned when he was arraigned in court on Wednesday.

The politician expressed this via his Twitter handle, @doyinokupe.

It may be recalled that Okupe was arraigned in January for alleged N702m money laundering, with the trial adjourned until February 27.

The January 14 arraignment had been on 59 counts of money laundering and criminal diversion of funds, preferred against Okupe before Justice Ijeoma Ojukwu of Federal High Court in Maitama, Abuja, alongside two companies, Value Trust Investment Ltd and Abrahams Telecoms Ltd.

On Wednesday, February 27, the EFCC opened its case against Okupe before Justice Ojukwu, and was alleged to have collected the money from the Office of the National Security Adviser “for doing nothing.”

At the Wednesday trial, the first prosecution witness, Osas Azonabor, an EFCC operative who was led in evidence by the Counsel to the EFCC, Ibrahim Audu, told the court that in 2016, “the EFCC received an intelligence report that some individuals were paid by the Office of the NSA for doing nothing.”

Azonabor said that, in the course of investigations, it learnt that the first defendant, Okupe, was a beneficiary and that the EFCC wrote the Office of the NSA asking for proof of payment vouchers.

According to him, after analysing the payment vouchers, it was realised that the cash payment of N50m was made into Okupe’s account, as stated in the voucher of April 8, 2014.

He also stated that another cash payment of N6m was found to have been made to Okupe on April 2, 2014.

The witness further told the court that EFCC’s investigation found N50m paid into the bank account of Value Trust Investment Limited, with Okupe as a director; and that another N35m was paid into the account of Abraham Telecoms Nig. Limited, to which Okupe was a signatory.

Detailing Okupe’s explanation about the money, Azonabor told the court: “He said that he was the SSA to ex-President Goodluck Jonathan from 2012 and that he was on a monthly salary of N835,000, paid to him by the SGF.

“The defendant also said that he received N10m monthly for 24 months from the office of the NSA and that the money was reduced to N5m monthly between January and May 2015.”

Azonabor said that Okupe told the EFCC that the money was for “special services,” but when he was asked to explain what it meant, Okupe said part of the money was used for the sponsorship of a national television programme, Insight.

In his Thursday Tweet, however, Okupe said the EFCC quoted a figure of N750m in a press release, rather than the N702m for which he is currently standing trial.