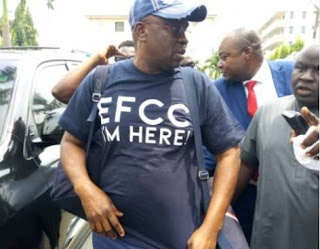 The trial of a former Governor of Ekiti State, Mr Peter Ayodele Fayose over an alleged N7.2 billion fraud, slammed against him by the Economic and Financial Crime Commission, EFCC, continues on Monday 4th of February.

The case is before Justice Mojisola Olatoregun of Federal high court Lagos where the former minister of State for Defence, Senator Musiliu Obanikoro has been testifying against Fayose.

Obanikoro, being led in evidence by EFCC’s counsel Mr Rotimi Jacobs SAN, had, at the last adjourned date, testified that he gave Fayose the sum of $5m in cash doled out from National Security impress account on the instruction of the then National Security Adviser to former president Goodluck Jonathan colonel Sambo Dasuki.

Dasuki is equally standing trial for allegedly squandering of $2.1bn meant for the purchase of equipment to combat the Boko Haram insurgents between 2013 to 2015.

Fayose applied for an adjournment, through his lawyers chief Kanu Agabi SAN and Olalekan Ojo SAN, to enable them cross examine Obanikoro.

Justice Olatoregun, while fixing 4th, 5th and 6th of February respectively for the continuation of the trial, held that it will be the last adjournment right from defendants until the conclusion of the trial.