Chelsea’s Sarri insists he can avoid being sacked 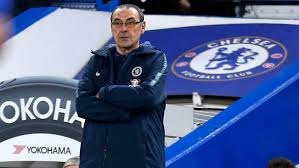 Maurizio Sarri insists he expects to avoid being sacked as Chelsea manager if his troubled side can put together a sustained winning run.

Reports on Wednesday claimed Sarri will be axed if Chelsea is beaten in any of their next three matches after losing the backing of the club’s hierarchy.

Chelsea owner Roman Abramovich is not renowned for his patience and Monday’s limp FA Cup fifth round defeat against Manchester United increased speculation that Sarri is on the brink of being dismissed.

Sarri faces a crucial seven days as Chelsea take a slender 2-1 advantage into Thursday’s Europa League last 32 second-leg against Malmo before facing Manchester City in the League Cup final at Wembley on Sunday.

Those games are followed by a crucial London derby against Tottenham in the Premier League next Wednesday, a match Chelsea can’t afford to lose as they sit outside the top four.

Acknowledging his perilous position can only be improved by a rapid reversal of fortunes, Sarri told reporters: “We need to win three, four matches in a row. It’s the only solution.

“There isn’t another way. We can only have good performances and results.”

With Chelsea in the midst of a bad run, Sarri is fighting to save his job less than a season after arriving from Napoli.

The United loss followed hot on the heels of a humiliating 6-0 thrashing at Manchester City, which ranked as Chelsea’s heaviest defeat for 28 years, and an equally miserable 4-0 defeat at Bournemouth.

Angry Blues fans have taunted Sarri with chants demanding the 60-year-old’s sacking and calling for former Chelsea star Frank Lampard, now in charge of second-tier Derby, to be hired as his replacement.

But, insisting he still has a future at Stamford Bridge, Sarri says he has not spoken to Abramovich or influential director Marina Granovskaia this week.

“I have to think that I will be the manager of Chelsea for a long time, otherwise I cannot work,” Sarri said.

“I am not sure (if I will be here for a long time), but I have to think this. I have to work and I want to work with a long-range target.

“Of course in this moment it’s very difficult to think we’re able to win three, four matches in a row. As you know very well in football everything can change in one day.”

One of the main criticisms of Sarri has been his stubborn refusal to change his tactics despite clear evidence that the formula that worked with Napoli is failing at Chelsea.

Sarri has held several lengthy inquests with his players after Chelsea’s worst results and conducted another after the United defeat.

But reports claim many of his players have lost faith with his football philosophy, especially his decision to use his former Napoli midfielder Jorginho in the holding role instead of N’Golo Kante, who had thrived in that position in the past.

Sarri’s hopes of getting Chelsea back to the form that saw them start the season with an 18-match unbeaten run are being hampered by the team’s hectic schedule.

“We’re trying to solve our problems. It’s not very easy because we have no time,” he said.

“We’re trying to talk with the players, trying to avoid some mistakes by video. It’s not easy, because we have to play every three days, so on the pitch, we have no time.”

The Italian still refuses to compromise on his 4-3-3 system and possession-based ‘Sarri-ball’ style, which was ridiculed by supporters on Monday.