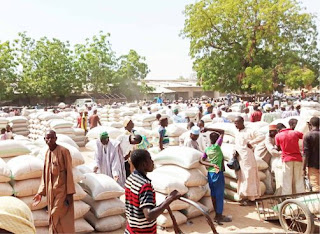 Business activities in Kano state are gradually picking up three days after the conduct of Presidential and National Assembly elections.

It could be recalled that offices, schools, markets and business places were closed to allow eligible voters to exercise their civic responsibility as citizens.

However, indicators have shown that business activities and movement within the state are gradually picking-up even though some schools still remained closed three days after the elections.

According to Musa Sani Mai Agogo, Muhammadu Abubakar Rimi Market Sabon Gari was closed since last Friday and was re-opened on Monday for normal business activities.

“Muhammadu Abubakar Rimi market was closed for two days and it was opened last Monday. Even though many of us were eager to return to our businesses after exercising our constitutional rights, not all businesses open as last Monday.

“Moreover, business activities have since picked up and people are conducting their activities peacefully in the market,” Mai Agogo said.

A visit to Kantin Kwari Textile market revealed that normal business activities have taken-up fully since last Sunday. According to a businessman Alhaji Isa Yakubu, the market was closed for the election and immediately resumed activities a day after.

“We closed just like any other markets and a day after we opened even though only a few traders opened on Sunday as you can see today is Tuesday and business is ongoing successfully,” he said.

Similarly, most of the public schools in the state resumed normal activities on Monday but some of the private schools are still closed. A parent, who spoke to the Chronicle, Malam Iro Bala said he took his children to their school on Tuesday only to be told that the school would re-open tomorrow (today).

“I assumed that the school will not resume until Tuesday based on the directives we received before the postponement and when I took my children on Tuesday, I was told the school will be resuming on Wednesday. I got to learn that many private schools will resume activities next Monday,” he stated.

However, businesses at the ever-busy Hajj Camp was halted due to election activities as the market is situated within the Independent National Electoral Commission (INEC) office and there was a heavy presence of armed security personnel comprising Army, Airforce, Mobile Police and Civil Defence Corps among others, to guard the office.

Checkpoints and roadblocks were mounted on all roads leading to the area which made some people apprehensive to even pass through the area while many were turned back as they approach the checkpoints.

Some of the traders, who spoke with our reporters, lament on how the situation is affecting their businesses.

A trader, who pleaded for anonymity, expressed dissatisfaction with the way the area was cordoned off by armed security personnel, saying that was not what obtained in civilized societies. “Don’t even go far, even some African countries such as Egypt, Congo Brazzaville and Ghana will not behave this way.

“They have blocked everywhere; they don’t allow people to pass. What do you expect if a visitor comes from Kaduna, Kebbi or elsewhere and he sees this kind of security presence, do you think they will come back?” he queried.

He said, some shop owners paid as much as N800, 000 to N1m as rent, and only God knows how much loss they were recording in these days.

He suggested the relocation of the office to an area where its presence would not constitute any form of hardship to the citizenry.

For Umar Sa’ad, who owns Airtel retail shop, the situation is worrisome as his customers were not allowed into the area.

He said, “I was sitting idly since morning, not a single person has come for either a SIM card or a recharge card.”

Similarly, Sa’ad’s friend, Jamilu Salisu, who sells dates and other Saudi-made wares said: “We did not sell anything, and you know some of us have to come here to get what to eat on daily basis.”

Sa’ad and Salisu both hope that the situation would not last long so that normalcy would return to the market.

Madam Rofi’at also owns a shop directly opposite the INEC office. For her, the situation affected her but positively.

“I am not saying I am happy with the situation, but frankly in terms of sales, ours has gone up because not many shops have opened,” she said

Madam Rofiat said most of the INEC staff purchase goods from her and the security personnel present were very friendly with her. So she has seen an increase in sales.

For Malam Sulaiman Mamuda, a textile businessman, the situation was not new.

Malam Mamuda, said whatever you do in life, you must pass through some trials and tribulations, and this is just part of it, “so we are not worried.

“I believe this is just for a short period of time and it will come to pass. Also, this security presence is for our own good as well, because some thugs may take advantage of the situation, under the guise of coming to INEC office and burgle our shops.”

Corroborating, the Secretary of the Hajj Camp Traders Association, Auwal Ahmad Shinkafi, said certainly the armed security presence had affected their businesses but having known that it was for a period that does not bother them much.

“It is also for our own security, talking about the security of our lives and property. The security personnel are not harassing us only that customers are not allowed in.

He called on the members to exercise patience as it would certainly be over.

In Jigawa, our reporter observed that from Friday through the weekend, activities were at their lowest ebb in the state capital as most of the commercial motorcyclists, water vendors, car wash workers provision store proprietors and host of many business outlets were closed down.

However, business activities have started to pick up within the state metropolis.

Abubakar Adamu is a water vendor in Takur Adua, said during the period of the election he did not only suffered low patronage but also starved as he is still a bachelor.

He said from last Friday to Sunday, he could not add a dime to his savings instead he was only counting lost because he had to spend from his little saving to feed himself.

According to him, on normal good days before the election break, he sales as much as 10 trucks of water but in the last two days he only sold two to three trucks.

He said he was optimitics that all would get back to shape as the day go by, insisting that they were use to such situations because that was normal during election periods.