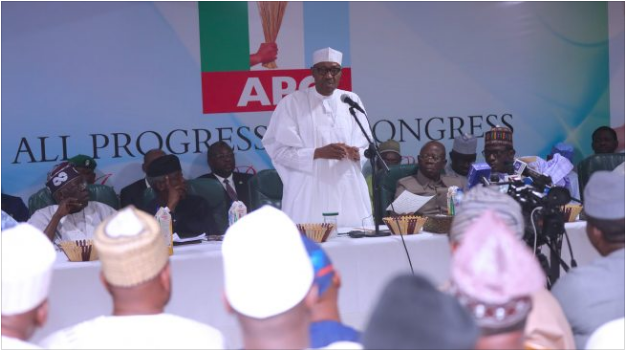 WHAT PRESIDENT BUHARI SAID…
“Anybody who decides to snatch boxes or lead thugs to disturb the election, maybe that would be the last unlawful action you would take. I have given the military and police the order to be ruthless. I am going to warn anybody who thinks he would lead a body of thugs in his locality to snatch boxes or to disturb the voting system; he would do it at the expense of his/her own life.”
WHAT SAGIR MUSA, NIGERIAN ARMY SPOKESPERSON SAID…
“If Commander-in-Chief has given order to the Nigerian Army to that effect, be rest assured that order will be totally and effectively obeyed without any ifs or buts.”
SETTING OF THE PRESIDENT’S ORDER

All Progressives Congress (APC) caucus meeting on Monday, Abuja, Nigeria.
LOOPHOLES
Overzealous Aides of the President will exploit this to the full and the Presidential and NASS election now slated for Saturday February 23 promises some sense of foreboding, perturbation and disquiet.
Soldiers who lack discipline may become vulnerable and willing tools due to financial inducements from state Chief Executives who may want to trample down on opposition voters.Governors who already have militarized their States in a desperate bid to impose stooges or return or impress the President will maximize this to the full.


Already,  there has been concerns about the alleged rascality of Governor Yahaya Bello of Kogi State against which several women have protested in Okene, Ihima and environs few days ago.
Already,  the Deputy Governor of same Governor Bello, Simon Achuba alerted the nation on the 18th of February that his “life was in danger” owing to Yahaya Bello’s alleged gangsterism and abuse of power.
Obviously, I wonder if many of these developments ever gets to Mr. President,  or if for electoral advantage he pretends not to hear them. I want to give a benefit of the doubt and assume those who should brief him deliberately skirt it over.
DOUBLE STANDARD
Those who are hailing Mr. President now for this directive cried foul when Ex Governor Ayo Fayose militarized Ekiti for his 2014 reelection bid. Videos were shared,  WhatsApp messages were flying around. Fayose was called a Tyrant. Why are you not speaking truth to power now by nudging President Buhari on the potential explosives inherently deposited in his declaration.
PDP CRY BABIES
Except a very few, many PDP supporters who are expressing dismay at President Buhari’s order now, were pouring generous encomiums on Elder Orubebe when he siezed and disrupted INEC proceedings in 2015 in his desperate support for President Jonathan’s re-election. What Orubebe did was as alarming as this declaration.
If the then INEC Chairman,  Attahiru Jega did not handle the situation with uncommon tranquil, Orubebe was practically walking Nigeria into anarchy.
I am not very persuaded that those who did not want Jonathan to relinquish power then would have been perturbed if he had elected to unleash terror on the populace back then. We were all on social media, and we recall the contributions of all of the hailers then, turned wailers now.
BUHARI IS SO WRONG!
President Buhari, when you want to give this kind of charge, let’s even assume it is lawful, you ought to do so within a stakeholder engagement of all parties. It should come in form of note of warning to all concerned. You could even add words like…“Let all Parties present be notified,  that my administration shall not condone electoral malpractices in any form. Ballot snatching is prohibited. Anyone caught shall face the full wrath of the Law. And please note that THIS DOES NOT EXCLUDE MY OWN PARTY, THE APC”.
By now, you’re likely to be receiving accolades, Mr. President.
I do not have tolerance for ballot snatchers. Infact, they should face the full wrath of the Law and be dealt with according to it’s dictates!
But gathering APC Stalwarts together while
calling on the Military to “deal ruthlessly” with Nigerians to the ears of your loyalists and Aides who already threatened us with “BODYBAGS” and those who already declared they shall rather die than have you lose election is tantamount to handing over a free license to the overzealous ones amongst them to “go ahead and do the needful”.
With due respect Mr. President,  they will read your ambiguous lips beyond your possible intent. The fact that Asiwaju Bola Tinubu needed to clarify this is an indication of the combustible nature of your directive. I dare say, you just gave a very inflammatory directive and you are wrong.
Why are you wrong? You did not think about those who would wear fake uniforms to polling booths unleash terror and vanish into thin air…Or the fake ones who after unleashing terror would be arrested and still  be released when their Sponsors place phone calls to the State’s CP?
You did not give thought to security Agents who are already trigger-happy and subject Nigerians to a daily spectacle of bloodshed. You have practically said, HAVE YOUR FILL to these blood-thirsty ones!
And at this caucus meeting Mr. President,  the election was so much of priority to you that neither you,  nor anyone in the APC caucus meeting remembered the Nigerian man who’s life was cut short on Sunday, the 17th February by the savage monster of the Nigerian Customs?  This is even as the Customs issued a shameless Statement to defend cold blooded murder. What is the life of a Nigerian worth? Not a CENT? Why is APC so brazen and so insensitive? Why did you not issue a directive that this trigger-happy Killer must be brought to book?
If opposition parties had communications’ strategists who could think out of the Box, they ought to have by now, taken full advantage of this stonecold inaction of this government against this Custom officer’s wanton recklessness to whip up citizens’ sentiments and translate it to vote. But that is if the opposition themselves are driven by selfless love for the people and a willingness for altruistic stewardship.
Just this past week, Thursday, February 14th at about 11.26 pm, an eleven year old girl, Riya Rajkumar was thought to be missing and an Amber alert was issued all around Toronto. In a spontaneous shriek of state-wide emergency,  the alert jammed all phones and TV sets.  Riya Rajkumar was eventually, reportedly found dead in her father’s Basement apartment in Brampton, Ontario on Friday. Her father,  Roopesh Rajkumar, 41, has been arrested and charged with first Degree murder!
Canadian citizens are mourning Riya Rajkumar.  Candlelight vigils were taking place in her honour while flowers of honour took over every space in her memory. The Prime Minister, Justin Trudeau tweeted his sympathy.  All for a valued 11 year old.
In Nigeria,  our Leaders seem to count and relish the numbers of murder, as it swings between odd and rhymes at even.

This unsympathetic, and unkind disposition of the President and his partymen is a low, even as it is a fall into moral rock-bottom for APC supporters who have now taken over the social media with the word, SHOOT, SHOOT and SHOOT! Your ecstasy for bloodshed is a misguided adrenaline!