Buhari pledges to sell recovered loot if he wins 2019 polls 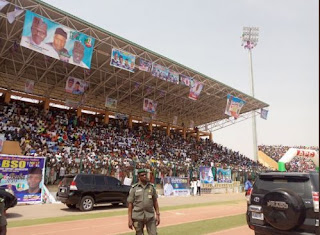 President Muhammadu Buhari has pledged to trace and return all stolen funds and assets stashed outside the country by looters if he is re-elected as president in the February elections.

Speaking during his presidential re-election campaign on Saturday in Gombe, Buhari pledged that all the stolen funds and assets seized from looters would be sold and the money would be invested in Nigeria.

Buhari, the presidential candidate of the All Progressives Congress (APC), added that if return as president his administration would ensure that there would be no wastage and squandering of government resources.

He told mammoth that gathered at the Pantami Township Stadium, Gombe that he was thankful to Allah who enables him to contribute to the peace being enjoyed in the north-east which was affected by the insurgency.

Earlier, during a courtesy call to the Emir of Gombe, Abubakar Shehu Abubakar III, Buhari promised to continue to improve on Agricultural sector for socio-economic development of the country if voted for the second term.

He said the exploration of Oil and Gas which he earlier flagged off at the border of Gombe and Bauchi states if completed, would contribute to the development of the state and the country.

The National Chairman of the APC, Adams Aliyu Oshiomole, said the social investments programmes brought by their administration have brought positive development to the populace.