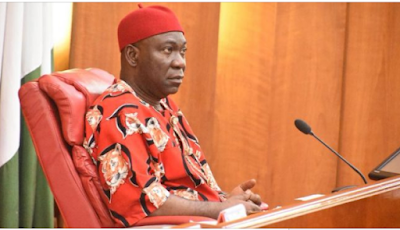 Mpu is the country home of the Deputy Senate President and PDP Senatorial candidate for Enugu West, Senator Ike Ekweremadu.

The Senator’s people delivered 100 percent of the votes cast for the PDP Presidential candidate, Alhaji Atiku Abubakar and the House of Representatives, Toby Okechukwu, with the All Progressives Congress, APC scoring zero.

There was wild celebration by the youths as INEC officials concluded counting of the votes.

Speaking to newsmen shortly after the counting of votes, a PDP stakeholder from the community, Mr. Bright Ekweremadu said it was expected because it is the Deputy President of the Senate’s ward and “so we don’t expect any other party to come in.

“For this community, we are overwhelmed, we are happy, it’s a sign that our Senator is representing us well and we are happy with him and the only way to pay him back is to cast our votes for him. And we have done that not only for Senate but the Presidency and House of Reps.”

Out of the 499 valid votes cast, PDP scored 468 votes for Presidency, 490 for Senate and 492 for House of Reps. Other parties scored zero.