Buhari campaigning for PDP in Kano with Ganduje’s endorsement – Kwankwaso 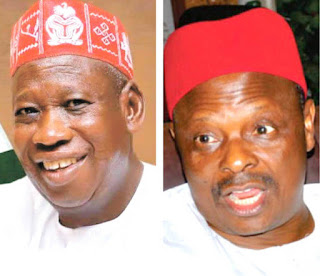 Senator Rabi’u Musa Kwankwaso has described the recent endorsement of Governor Abdullahi Umar Ganduje’s second term gubernatorial bid in the upcoming general election by President Muhammadu Buhari during his presidential campaign visit to Kano as an added advantage to the Peoples Democratic Party (PDP) in the state.

Speaking during a two-hour programme on a local radio station in the state, Kwankwaso, a serving Senator representing Kano central, stated that Buhari’s endorsement of Ganduje was a big mistake done by the President, considering all the circumstances surrounding the candidature of the governor.

“For those that genuinely love Mr President, the endorsement was seen as a mistake and I strongly believe that it was a mistake.

“However, for us in PDP, President Muhammadu Buhari’s visit to Kano state and the endorsement of his party’s gubernatorial candidate was a big campaign for us, go round and sample views, you will understand what I am saying,” said Kwankwaso.

He further revealed that his party and the Kwankwasiyya movement were always committed to serving the general public’s interest, questioning the way government activities were being conducted in present-day democracy.

“I am not contesting for any position, I have observed the happenings for three good years and now is the time for all well-meaning Nigerians to use their constitutional right to affect the needed readjustments.

“The way government and government activities are being conducted in present-day democracy in Nigeria calls for serious attention to the dictate of real democracy,” he said.