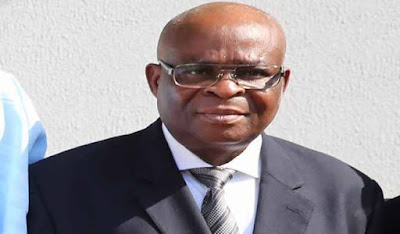 The Code of Conduct Tribunal (CCT) has issued an arrest warrant against Walter Onnoghen, suspended chief justice of Nigeria.

At its resumed trial on Wednesday, the tribunal ordered the nation’s security agencies to arrest Onnoghen after he failed to appear before it.

Aliyu Umar, lead prosecution counsel for the federal government, had asked the tribunal to order Onnoghen’s arrest over his refusal to appear before it.

The suspended CJN has not been in court for at least five times since his trial started.

The federal government is prosecuting him for alleged false assets declaration.

Umar, while making an oral application for the arrest warrant, kicked against Onnoghen’s continued absence.

He said both the administration of criminal justice act and the practice direction of the CCT mandates a defendant to be present in court before any proceedings can be conducted in respect of a pending charge.

Adegboyega Awomolo, lead defense counsel, however, kicked against the application.

Onnoghen had asked Umar to withdraw from presiding over his trial on the grounds of “real likelihood of bias”.

But Umar said he and members of the tribunal are not judicial officers, hence they cannot be subjected to disciplinary actions by the National Judicial Council (NJC) or the Federal Judicial Service Commission (FJSC).

A civil society group, Anti-Corruption and Research-Based Data Initiative (ARDI), had petitioned the Code of Conduct Bureau (CCB), listing a number of allegations against Onnoghen.

He was accused of maintaining domiciliary foreign currencies account said to be contrary to relevant laws, especially for public office holders.

But the suspended CJN had accused the tribunal of bias in his trial.

He had filed an application for a stay of proceeding of the case, at the court of appeal but the court turned it down.

It is, however, yet to rule on Onnoghen’s application challenging the jurisdiction of the CCT to entertain the case.

The National Judicial Council (CJN) recently set up a panel to investigate the suspended CJN as well as Ibrahim Muhammad who is acting in his stead.