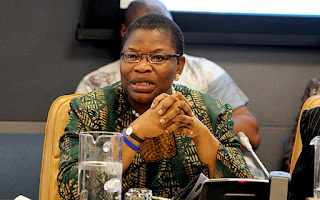 Former presidential candidate of the Allied Congress Party of Nigeria, ACPN, Oby Ezekwesili has officially resigned from the party.

This was disclosed in a press conference organized by Ezekwesili in Abuja.

The former presidential candidate returned ACPN membership card and all other party items as she officially resigned.

She revealed that she made this move because the party was more fixated on Money than Votes.
According to her, the party became ‘frustrated’ with her after they realized “I was not using my global network to get some countries, organizations and foreigners to donate money to their Party like the APC and PDP do. The more I told them that I was committed to abide strictly to the provisions of the Electoral Act and INEC rules on campaign finance and was not going to negotiate that in order to satisfy their monetary demands, the more frustrated they became.”

Ezekwesili stated further: “Let me take a moment to address what appears to be an error of judgment that made me run on the platform of the quality of people that ACPN turned out to the harbor. As you know, until I decided to run for President last October, I was not a politician but strictly a public policy expert. I have always believed that the brand of politics we practice in this country is perverse and unappealing to me.

“A series of deeply agitating occurrences moved me to take a keener interest in the toxic effect bad politics has on governance of Nigeria. Most of 2018 saw me increasingly mobilizing citizens to become more politically conscious and pay deeper attention to the activities of our politicians nationwide.

“I preached that to correct the prevalent bad governance for which Nigeria is globally derided, our citizens would need to take collective actions that terminate bad politics. Evidence abounds that our version of Politics undermines everything that we do in this country, whether it is what citizens do, what businesses do, what the society at large does. it undermines governance.

“When the ACPN leadership approached me in a series of visits to appeal that I run for office on their platform, the party appeared to be a good fit. It was founded by some disgruntled PDP members some years ago, but when its prime founder decided to return to the PDP, a core of its membership refused to move back with him. I was told that they stayed back because of their opposition to the ways of the PDP. Considering my vocal disapproval of the PDP and the APC, I admired the ACPN’s decision to stand firm and refusal to be co-opted.

“Also, the party came fourth in the popular votes count for the 2015 elections. So this was not exactly a mushroom party.We held several meetings before I chose to run on the ACPN platform, and in each of those meetings, I was clear to all that if the target was the same transactional money-grabbing politics that has held us back, I would never go along with it.
“My public stance that the nomination form for Presidency should not be above N100,000 was acceded to by the Party while they pressed me to join their fold. I also privately and publicly during the convention that adopted me as their presidential candidate disclosed that there was no personal war-chest for politics available to me and called on the Party to get ready for all of us to disrupt the traditional way of campaigning by the dominant parties. You may have seen some of the videos from those early meetings. You would notice that they repeatedly assured me that we shared common values and principles. We shook hands and made it formal.

“I knew that along the way I will face tests of my values, but I didn’t expect it so soon and not from the party members who had assured me privately and publicly that they were on the same page with me. In truth, our values were poles apart.

“The ACPN leadership demonstrated in deeds that they did not believe in my advocacy for a cleaner politics. They were not really interested in being a vehicle to break the bad politics championed by the #APCPDP. In fact, the ACPN leadership began to act like a junior sibling to the twin #APCPDP party.

“At one point, we were supposed to have a meeting with all the state coordinators of the party. Instead of the ACPN leadership to be honest about the strengths of the party and explain that some states did not have coordinators at the time, they hired fake coordinators, and asked the campaign to fly them into Abuja.

“You all saw how they demonstrated their preferred brand of politics last week by endorsing the ruling APC in a classic summersault. Deceptive politics of transactions at its worst!

“Their actions last week did not surprise me one bit. My relationship with the ACPN became problematic once they faced the reality of my modest financial means that I had transparently disclosed to them from the beginning. Their mistake was that they harbored two wrong assumptions about me.

“First, they assumed that I was one of those who served in government and had a stash of looted public funds hidden somewhere to expend on the elections. When they realized that was not the case, they made a second wrong assumption by believing that I would be willing to go and obtain foreign cash to prosecute my campaign. The leadership of the Party became frustrated that I was not using my global network to get “some countries, organizations and foreigners to donate money to their Party like the APC and PDP do. The more I told them that I was committed to abide strictly to the provisions of the Electoral Act and INEC rules on campaign finance and was not going to negotiate that in order to satisfy their monetary demands, the more frustrated they became.

“Ladies and gentlemen, in all these, the options before me were clear. I could give in to the ACPN’s desperation and use any means necessary to satisfy those fellows or I could uphold my values and leave their fold. I could succumb to their pressure, pretend as though I did not see how utterly corrupt their ransom demands were and continue with the campaign or I could step up at great personal cost to myself, and say ENOUGH.

“Immediately I expressed my options in those clear terms, the choice was easy. I cannot do anything that contradicts my eternal values. For someone who was running for office with a promise to fix our politics, getting mired in the mud of transactional anti-people politics would have represented a quick fall. God forbid! I had to live my values; I had to follow my truth. And I am proud I did.

“The only thing I now owe the ACPN is a total and immediate separation from their camp. I have earlier today returned my ACPN membership card, party flag and other paraphernalia in order to signpost my complete separation.”