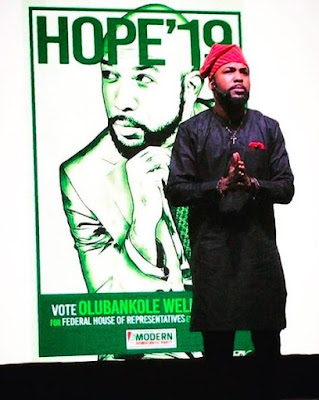 Popular musician turned politician, Bankole Wellington, of the Modern Democratic Party, garnered 186 votes at the polling unit at the Victoria Garden City, Lagos, defeating the All Progressives Congress which got 167 votes.

It was the same polling unit where Vice-President Yemi Osinbajo, and his wife, Dolapo, cast their votes earlier on Saturday.

Wellington, who goes by the stage name Banky W, took the second position at the polling unit as the Peoples Democratic Party candidate, Omotesho Bakare, had the highest number of votes which was 244.


Banky W, who is the candidate of the MDP, is a first-timer in politics and is contesting against Babajide Obanikoro, the first son of a former Minister of State for Defence, Senator Musiliu Obanikoro of the APC and Bakare of the PDP.