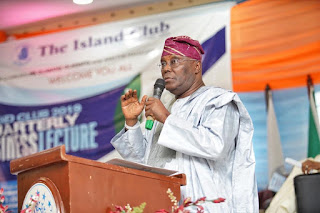 The Chairman of the Atiku-Obi Presidential Campaign Council in Anambra State, Mr Oseloka Obaze, has said the election of Alhaji Atiku Abubakar in the February 16 presidential election will hasten the chances of the South-East to produce Nigeria’s President.

Obaze said this in Awka, Anambra State, on Monday.

He said any vote for Atiku “is also a vote for Peter Obi, who will be saddled with the responsibility of managing the country’s economy.”

Obaze said, “Over 40 million Igbo people cannot afford to wait for another four years to realise the so-called promise of being handed over to by the APC government.

“Vice-President Yemi Osinbajo and Babatunde Fashola, both potential 2023 presidential candidates, have said publicly and without any apologies that President Buhari would hand over to the South-West in 2023.

“Their permutation does not feature Ndigbo.”

He urged the people of the South-East to vote massively for Atiku and Obi.