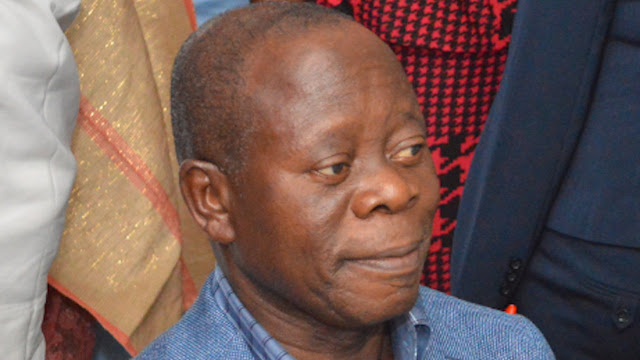 The National Chairman of the All Progressives Congress (APC) Comrade Adams Oshiomhole has said that the Presidential candidate of the People’s Democratic Party (PDP) has practically vindicated the APC claim that the opposition was working with some officials of Independence National Electoral Commission (INEC) to compromise the Presidential election.

Oshiomhole who addressed newsmen on Tuesday evening said it is clear that the only mission of the PDP candidate is creating confusion in the electoral system so that he will become President even it means presiding over graves.

He said only those who want to deploy thugs to undermine the elections will oppose or find fault with the statement of the President aimed at discouraging thuggery during the election.

Oshiomhole said the attention of the international community at the moment is that elections across the world should be violent free and assured that the forthcoming elections will be conducted in a free and fair atmosphere.

He sais “It is only those who believe in thuggery that will find fault with the President’s directive. Is there anyone that would want to vote for thuggery? Is there any thug that is not armed. You cannot snatch ballot box without the aid of firearms. So, when the International community is talking about violence-free election, they are saying the election should be free of thuggery.

“You can see that the PDP is not at home with that because they imported thuggery, institutionalized it and have always fallen back on it as an instrument of rigging and to dominate the electorates. So, we debunk any attempt by Atiku to change the essence of the President’s statement.

” I believe the president spoke the kind of the average Nigerian who wants to go and vote and come home in peace without fear of being attacked. You know that thuggery is synonymous with violence and the world is unanimous that violence should be removed from election. Atiku’s rejection exposes PDP for what they are. Their plans is to deploy thugs so that the election will be impossible or reduce voter turn out.

“To say that the APC Imported card readers is laughable and that the card readers have been deployed to the south south and southeast. The implication of this is, assuming it is true without conceding, it means that Atiku is working hand in hand with the ICT unit in INEC to know the kind of machines that are deployed to where.

“Recognizing that INEC is Independent, we are not able to know the kind of card readers INEC is deploying or where they were imported from. But if Atiku has all of these details, it can only mean that he is working hand in hand with people within INEC to know where machines are imported from and the fact that card readers can be programmed otherwise.

“We are not like a stammers who look for a fight because they cannot win an argument. We believe that the electorates are ready to vote for us and we want those votes to take place in a free and fair atmosphere.

“I think that Nigerians should be United when it comes to the issue of a free and fair election. Our candidates also have the responsibility for peace and security of Nigerians. He has the duty to ensure that the life of the Nigerian electorate is protected as well as those of the observers. That is the responsibility of the commander in Chief.

“So, if Atiku finds fault in this, if anybody is pro thuggery, we are against thuggery and we are against violence. The International community should properly decode Atiku’s statement sling the president to withdraw his threat not against the electorates, but against would be thugs or merchants of violence.

“As far as I am concern, Atiku knows that he can’t win. In 2003 elections, he lost his base in Adamawa. He is on record to have procured a Senatorial seat for Prof. Jibrin Aminu. If he wants to go to court, I will meet him there and I will produce the first INEC documented report that announced the winners of those Senatorial seats.

“He also went on to rig the governorship election that was won by Hashidu in Gombe state. So, with Atiku as a leading player, Atiku has lost the election in Adamawa State and so, the fear of defeat is already down on him.

“We are ready for the elections and by the grace of God, Nigerians will vote for us and Atiku will remain a permanent presidential candidate which Nigerians never had.”

He said further that “This afternoon, we monitored the statement by the PDP candidate, Atiku Abubakar, and the PDP national chairman, Uche Secondus in which they tried to distort the message which of the President who reassured Nigerians that he has given appropriate directive to security agents to ensure that Saturday election is free and fair.

“from the response of the PDP Candidate, it is clear that they have already conceded defeat. First, he claimed that he has two strongholds which he identified as south south and southeast. That is not true because I come from the south south and we are not voting Atiku. We have since dismantled the PDP machine in Edo state and Edo is the heartbeat of the Nation.

“Even If you take the statement in its face value, if Atiku concedes that out of six geopolitical zones, he has support, not in his own zone, but south south and southeast, the voting population in these two zones are jot enough to deliver the presidency to any candidate in Nigeria.

“Every peace loving Nigerian and those who wish Nigeria well are speaking one common language of free, fair and violent free election. What the President said and we are proud that he has the courage to say it that he has asked security agents to create an enabling environment for Nigerians to out and vote without fear that thugs will attack them and that security agents are going to put thugs in check. No peace loving Nigerian can find fault with that.

“I think it does expose PDP for what they are. Atiku as Vice President to Obasanjo was there in 2003 when people were killed by thugs. In my election in 2007, three young men were shut down by PDP thugs at Oba Primary school. So, no responsible candidate will find fault with any pronouncement that tends to discourage thuggery in the coming elections.

“So, for a man who is aspiring to preside over Nigeria to seek protection for thuggery is uncalled for. He has already said he will grant amnesty to looters. I don’t think Nigerians have any basis to doubt that Atiku’s mission is to set Nigeria on fire so that he can become President, even If he will preside over a graveyard.

“By the special grace of God, this election will come and pass, Nigerians will vote, no one will be harmed, no one will be intimidated. We believe that the President was right to say that anyone who resorts to violence will be dealt with.”