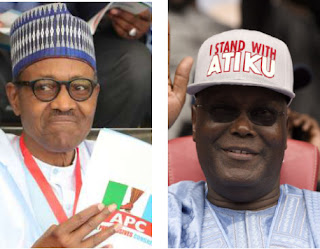 The presidential candidate of the Peoples Democratic Party (PDP), Atiku Abubakar has appealed to President Muhammadu Buhari to use his office and ensure that every vote cast in this Saturday’s presidential election counted.

Atiku, a former Vice President also urged security agencies not to embark on indiscriminate arrests of members of the opposition, 24 or 48 hours to the elections, as has been the case in previous elections.

Speaking during the second signing of a peace pact by presidential candidates of various political parties on Wednesday in Abuja, Atiku who also signed the document demanded the Independent National Electoral Commission (INEC) and the Police to be neutral and allow the will of the people to prevail.

He said the election was about the future of Nigeria and called on all candidates in the election and other political actors to play by the rules of the game to ensure a free and credible process better than that of 2015.

“Hopefully, our democracy should emerge stronger from this process with the 2019 elections proving better managed than the 2015 process, which was adjudged free and fair with the then opposition’s victory unobstructed

“Consequently, I also appeal to the President, General Buhari, to use his good office to ensure that every eligible person who casts their vote is confident in the process and in the belief that their vote will count.

“Additionally, every candidate must remember that this election is about the future of Nigeria, therefore, we must abide by the will of the people as freely expressed through elections, under the terms of our constitution.

“Once again, despite concerns expressed by my party leaders concerning likely electoral malpractices and the intimidation of voters and observers, I trust that our election officials and security services will do their duty in accordance with their oath and obligations.

“In conclusion, I appeal once again, to our citizens, to go out and cast their votes for the candidates of their choice, to be peaceful at all times, and confident in our democracy, its institutions and processes,” Atiku said.