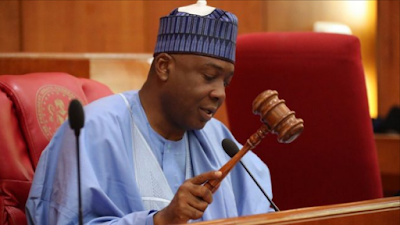 The All Progressives Congress, APC, Caucus in the Senate has filed a suit at the Supreme Court, against the Senate President, Dr Bukola Saraki, with regards to the suit he earlier filed over the suspension of Chief Justice of Nigeria, CJN, Walter Onnoghen by President Muhammadu Buhari.

We had reported yesterday that Saraki withdrew the case from the Supreme Court as a result of the intervention of the National Judicial Council, NJC.

Saraki had approached the apex court to seek interpretation of the suspension of Onnoghen as CJN by President Buhari.

Notwithstanding the discontinuation of the matter by Saraki, senators of the ruling party have gone to the Supreme Court to challenge the Senate President.

The Senate leader, Ahmad Lawan pointed out that the decision to go to court was arrived at during the meeting of the senators on Monday.

Lawan, in a statement he personally signed and made available to journalists in Abuja, said the APC, which has 56 members, is challenging the said suit and has vehemently objected to the inclusion of its members.

His statement reads, “The Senate caucus of All Progressives Congress, APC, consisting of 56 senators, being the majority party in the Senate, has today (yesterday), Monday, February 4, applied to the Supreme Court to join in the suit purportedly filed by the Senate against the President and Commander-in-Chief of the Armed Forces of the Federal Republic of Nigeria as interested parties.

“The APC senators rely on the Supreme Court (Additional Original Jurisdiction) Act of 2002, which provides that the resolution of the respective Chamber of the National Assembly is a prerequisite of filing such suit.

“The caucus is, therefore, challenging the said suit and objects to the inclusion of its members.”