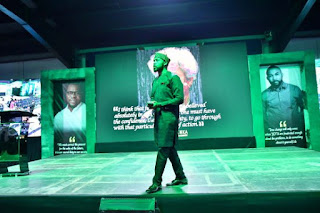 The celebrities, contesting under various political parties, are seeking mostly to represent their constituencies in legislative positions.

Singer and actor, Banky W, who is vying to represent Eti-Osa at the Federal House of Representatives, has the most publicised celebrity campaign on social media.

He unveiled his plans to contest under the Modern Democratic Party (MDP) on Nov. 10, 2018, with a social media announcing explaining the need for young people to get involved in the electoral process.

Sharing on his Instagram page @bankywellington, he said, “They said we don’t have the money to run, we say our strength lies in our numbers. They say we don’t have the structure, we say we will attempt to build it.”

Following the announcement, other celebrities, including his wife actress, Adesua Etomi-Wellington have pledged their support massively, urging other young people to do same. Campaign concerts are held in the place of rallies.

Nollywood actor and filmmaker, Elliot announced on Dec. 10, 2018, that he was seeking re-election in Surulere Constituency 1 of Lagos State House of Assembly, which he currently represents, under the All Progressives Congress (APC).

It was gathered that on Oct. 24, 2018, actor Emeka Ike made public his intentions to represent Okigwe South Federal Constituency at the Federal House of Representatives under the Young Progressive Party (YPP).

He shared the campaign poster on his Instagram page @emekaikeofficial with the caption, “If the young has a voice, it’s now. Let’s urbanise Okigwe South Federal Constituency. Let’s engage her youths now.”

Also, popular celebrity social commentator and musician, Mr Jollof announced his election bid on Sept. 24, 2018, with posters of his campaign and the logo of his party, African Action Congress (AAC).

Sharing the materials, showing his interest to represent Warri Federal Constituency, on his Instagram page @mr.jollof_, he wrote, “I don pay for nomination form o. As day break, make everywhere burst. Let’s take it back.”

Meanwhile, entertainment businessman, Shina Peller, on July 6, 2018, announced his intentions to represent Iseyin/Itesiwaju/Kajola/Iwajowa constituency at the Federal House of Representatives under the All Progressives Congress (APC).

He wrote on his Instagram page @shinapeller, “Hey people, I would like to formally invite everyone to the declaration of my political ambition.”

Each of these celebrities have been making use of his social media platforms and large followership to push their political ambitions, with some keeping online diaries of campaign activities.