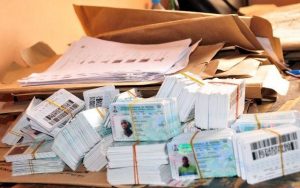 The Resident Electoral Commissioner, Mal Garba Madami, said this during a press briefing at INEC office in Ilorin.

He said, “for this elections, a total of 1,407,400 voters registered out of which 1,149,969 permanent voters cards have been collected which represent 82 percent and we are left with the balance of 257,431 PVC uncollected and same has been forwarded to the central bank for safekeeping until after the election,” Madami said.

Speaking on the election materials, he explained that there were 1,872 polling units and 1,015 voting points which will be used wherever there were more than 750 voters in a unit.

“Electoral staff needed for the exercise have been sourced as directed by INEC headquarters, trained and deployed. On the whole, a total of 11,992 is to be deployed for the elections.

“2,887 smart card readers have been upgraded, fully charged and deployed to the field with necessary contingency,” he said.