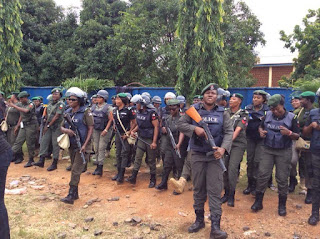 Transparency International on Wednesday raised fears over the militarisation of the 2019 general elections by the Federal Government.

The organisation advised that the action should be dropped to enhance the credibility of the electoral process.

TI said concerns were based largely on the roles played by various security personnel in the off-cycle elections held in 2018 and the desperation shown by some politicians to be elected by all means.

The Programme Manager of Civil Society Legislative Advocacy Centre, (intermediary of TI in Nigeria), Salaudeen Hashim and Executive Director, Musa Auwal Rafsanjani, raised these fears during the public presentation of a preliminary report and research on “Involvement of Nigerian security services in the electoral process: Guardian or threat to democracy.”

The researchers said the report would be transmitted to every stakeholder involved in the electoral process in Nigeria.

The report read, “The high policing of elections by a plethora of security agencies will not only make it impossible for members of the opposition to go out to vote, out of fear of intimidation but also for the general electorate not to exercise their franchise. It may also engender psychological and structural violence on citizens.

“Overall, it will compromise their professional credibility and deepen partisanship within their ranks. The excessive spending on funding security services for electoral duty deprives the country of resources that could better be invested in providing infrastructure in the critical sectors such as health and education.

“The solution to the involvement of the Nigerian Armed forces and other para-military/security services, beyond the Police, in electoral processes is to stop it without further delay.

“Instances of pre-election tension do not always translate to crisis on election day. For this reason, use of para-military organizations and security services, beyond the Police, in the electoral process is unnecessary.

“Elections should be treated as any ordinary exercise Nigerians engage with and efforts made to de-prioritize it above other civic activities. In principle, the responsibility of providing security and safety should be a daily priority that should not be given any undue attention during elections.”

“How do you then make up for areas in such situations? It then means that there will be some level of palpable tension in areas where people believe that there are states which are up for grabs by the ruling political party or those who want to retain their seats.

“So, there is going to be a lot of intrigues as we go into the elections. Yes, we are afraid, there is the fear that security agencies might be used and compromised during these elections. It is an issue that should put everybody on notice that there is no need to militarise our democratic process.

“We must ensure that our democratic process remains as it should be and institutions must function they way they should be and not allow anybody to push them around. Everybody will actually be put on the same page with what our findings actually revealed.

“But the desperation and some levels of intrigues have also come into play. That has increased the level of involvement of security agencies in elections. So, we have a situation where some security personnel have become a little bit partisan.

“That calls for concern and there is a need for them to be very neutral in terms of the role they play in the build-up to the election and the election itself. The report also shows how security agencies have also participated in snatching ballot boxes and of course supporting politician to engage in some kinds of unorthodox practices. This was partly what also informed this research.

“The trend is actually worrisome and we hope that something will be done to arrest it before it becomes a little of more concern to the international community.”

“Those who are charged with securing the electoral process must remain neutral. The case of Ekiti State in 2014 clearly shows how security agencies became active participants and actually manipulated the process. After that, nothing has happened.

“We have also seen rising trends from 2011 to 2015 and by 2015, it had really become increasingly very worrisome and we have seen how opposition have been clamped down in recent times as a result of using security agencies in elections.”