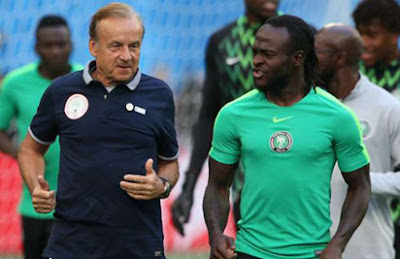 The 28-year-old was a crucial part of Chelsea’s 2017 Premier League-winning side and in 2013 won both the Europa League for his club and the Africa Cup of Nations for his homeland.

But the winger quit the Super Eagles aged just 27 after the Russia-hosted World Cup where defeats by Croatia and Argentina dumped Nigeria out in the first round.

Moses said he wished to concentrate on his club career and his young family.


Rohr said Moses had always acquitted himself well for his country and had announced his retirement too early.

“We have to respect his decision. If he changes his mind we will welcome him back,” said Rohr.

“But he has to find that motivation within himself to come back and be ready to give his 100 per cent at all times, as we know he can.

“Then of course, it is important that he gets back to playing regularly at his club and get his sharpness back.”

Moses was a regular at Stamford Bridge in the last two seasons when Antonio Conte steered the Blues to the English Premier League title in 2016-17 and last year’s FA Cup.

But he has fallen out of favour with new manager Maurizio Sarri and made only a handful of appearances, prompting talk of a move away from Stamford Bridge.