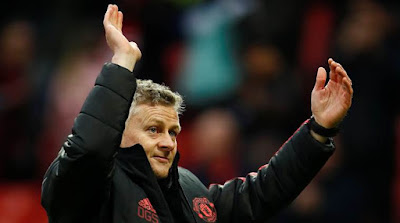 Manchester United’s Ole Gunnar Solskjaer enjoyed his fifth successive victory since being named interim manager as his much-changed side beat second-tier strugglers Reading 2-0 at home in the FA Cup.

Saturday’s victory was in the third round of the competition.

Juan Mata’s penalty kick and a well-taken effort in first half stoppage time by Romelu Lukaku, given his first start since Solskjaer took over, sent Manchester United into the fourth round.

It was a subdued performance by the 12-time FA Cup winners at Old Trafford, where Reading impressed.

However, they maintained former striker Solskjaer’s dream start to life in the hot seat vacated last month by Jose Mourinho.

Manchester United were joined in the next round by West Ham United who beat second-tier Birmingham City 2-0 at the London Stadium.

Samir Nasri made his debut for the Hammers in his first game since completing an 18-month doping ban.


Austrian Marko Arnautovic put West Ham ahead early on but was later substituted because of injury.

English Premier League strugglers Burnley made hard work of a 1-0 win over third-tier Barnsley in a match notable for a bizarre VAR intervention in the first half.

Burnley were awarded a penalty kick for a foul on Matej Vydra, but just as he was running up to take the spot kick the referee Simon Hooper changed it all.

He indicated that the decision to award the spot kick had been reversed because of an offside decision.

Chris Wood sealed victory for Burnley from the penalty kick spot in the second minute of stoppage time.

Brighton & Hove Albion beat Bournemouth 3-1 away in an all-English Premier League affair with Anthony Knockaert, Yves Bissouma and Florin Andone all on target.

Cup holders Chelsea were in action later at home to Nottingham Forest while Arsenal visited Blackpool.(Reuters/NAN)