Solari in the dark about VAR after Madrid penalty controversy 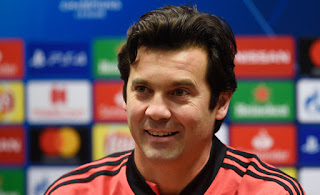 Real Madrid coach Santiago Solari on Tuesday called for the video assistant referee rules to be made clearer after admitting he has no idea how the system works following penalty controversy at the weekend.

Madrid fell to a limp 2-0 defeat 2-0 at home to Real Sociedad in La Liga on Sunday and were denied a penalty in the second half while they still trailed by a single goal.

Solari was incensed after referee Jose Munuera ruled that Madrid forward Vinicius Junior was not fouled by Sociedad goalkeeper Geronimo Rulli while bearing down on goal in the 65th minute and then decided against consulting the VAR team, which did not refer the incident to Munuera.

“The rules have to be clear,” Solari told reporters. “If the rules are clear and we know when it can be used, that’s going to help everyone’s understanding, not just for the players but the fans as well.

“It happens to me as a spectator too. I’m not even sure what the process is with VAR.”

FIFA rules state that VAR can be used in relation to goals, penalties, red cards and cases of mistaken identity.

Madrid sit fifth in La Liga, 10 points adrift of leaders Barcelona, with their best chance of further success this season now in the Champions League or Copa del Rey, in which VAR has been introduced for this season.

Gareth Bale will miss Wednesday’s opening leg of their Copa tie against Leganes at the Santiago Bernabeu with a calf strain, and the Welsh winger is not expected to return in time for Real’s league fixture at Real Betis on Sunday.

Bale was in the stands to watch the defeat by Sociedad last weekend but raised eyebrows by leaving the stadium around 10 minutes before full-time.

Asked about Bale, Solari said: “These are the sort of matters we deal with internally”.

Solari is likely to make several changes against Leganes and Brahim Diaz could make his debut after joining from Manchester City.

The 19-year-old was officially unveiled on Monday and Solari said his availability would depend on relevant paperwork being submitted in time.