Saraki’s loyalists in govt will be removed, says Lai Mohammed 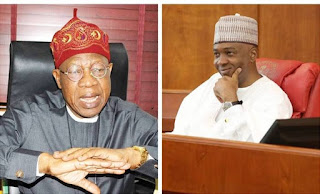 The Minister of Information and Culture , Alhaji Lai Mohammed, says some of the loyalists of the President of the Senate , Dr . Bukola Saraki, holding federal executive positions will soon be shown the way out.


The Minister disclosed this on Thursday in Ilorin at a ceremony organised by the Kwara State All Progressives Congress to sensitise and mobilise the party ’ s women leaders ahead of the forthcoming general elections.


The News Agency of Nigeria reports that the minister said that despite Saraki allegedly using his position to sabotage national development to the detriment of the people, his loyalists from Kwara State were still occupying executive positions.


He said the Federal Government would not hesitate to sack those beneficiaries in executive positions.


‘‘ Some of the people they nominated to the boards of government ’ s agencies and parastatals are still there, yet they claim that Kwara has not benefitted from this Federal Government.


‘‘ These people, some of whom are holding executive positions , will soon be shown the way out , ’’ he said.


Mohammed said Kwara elections , like that of the general poll, would be issue- based devoid of ethnicity, religion or gender.


He said the issues the APC is concerned with in Kwara have to do with good governance and a better life for the people.


‘‘ The main issues here have to do with how our state has been governed in the past 50 years , 40 of which have been dominated by a single family.


‘‘ What has happened to the commonwealth, which has been cornered by a single dynasty at the expense of the people.


‘‘ Where are the roads and other infrastructure to justify the huge resources that have accrued to the state ?


The minister stressed that the 40 years of the Saraki’ s family in power , the state has no potable water for people to drink , adding that workers had been pauperised because of non -payment of their salaries .