Resign if you have political ambitions, Buhari tells African soldiers 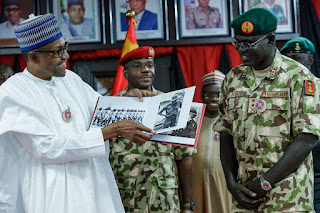 President Muhammadu Buhari on Tuesday asked military  officers harbouring political ambitions to resign or stick to their professional responsibilities  of protecting the territorial integrity of the country.

The President, who  noted that democracy had come to stay,  added that it was the surest way to guarantee peace and stability in governance.

Buhari was reacting to the failed coup attempt in Gabon on Monday.

“The military officers in Gabon should understand that the era of military coups and governments in Africa and indeed worldwide, is long gone,” the  President was quoted as saying in a statement  by his Senior Special Assistant on Media and Publicity, Garba Shehu, on Tuesday.

“Democracy is supreme and the constitutional stipulations on the peaceful change of administration must be respected.

“That is the only way we can ensure peace and stability not only within the country but also in the region.”

Buhari, who doubles as the  Chairman of the Economic Community of West African States, called on the citizens of Gabon to remain calm  and to support democratic rule for the security and stability of the country.

The statement added, “President Buhari, who is also the ECOWAS Chairman, urges military officers with political ambitions to resign or face their constitutional role.”

Recall that a  group of soldiers made a failed attempt to seize power in Gabon on Monday after they made appeals for mass uprising through a radio station.