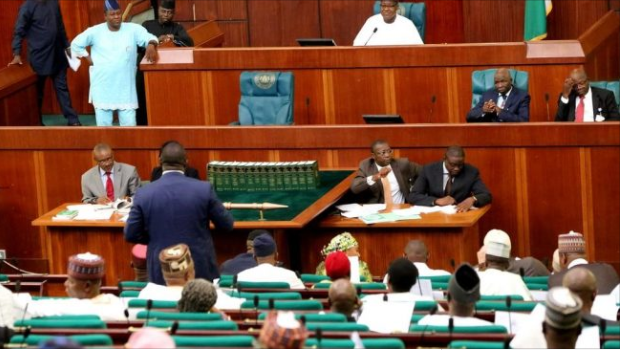 Members of the House of Representatives on Thursday faulted the Council of State for approving N27,000 as the new minimum wage when the agreement reached by the government, organised labour and the private sector was N30,000.

The lawmakers, therefore, expressed their readiness to adopt the N30,000 proposed by the tripartite committee, whose report was presented to President Muhammadu Buhari.

At the plenary on Thursday, the Speaker, Mr. Yakubu Dogara, had read a letter by President Buhari to the legislature, seeking an amendment to the Minimum Wage Act 1981, to reflect a new minimum wage of N27,000.

The Deputy Chief Whip, Mr. Pally Iriase, called for the approval of N30,000 wage for workers.

While saying that “the revenue allocation formula is overdue for a review, the lawmaker charged his colleagues to “stand up for once” in defence of workers.

“Mr. Speaker, N30,000 will be what this House will pass. This House should pass N30,000 instead of this rigmarole,” Iriase stated.

Similarly, another lawmaker, Mr. Oluwole Oke, said, “I want to observe that no Nigerian worker earns a minimum wage. I’ve tried to compare the minimum wage here with other climes and arrived at an average of N900, assuming the worker works for eight hours. The N27,000 is grossly inadequate.”

Also, Mr. Chika Adamu, who noted that an increase in the minimum wage was a welcome development, said, “The N27,000 arrived at is grossly inadequate.”

According to him, the economic indices and the imminent rise in the prices of commodities as well as the move by the Federal Government to impose new taxes as part of its revenue drive, would not make a N27,000 wage realistic.

“This money is grossly inadequate. By the economic indices that we have on the ground, this money will have no value by the end of the year,” Adamu stated.