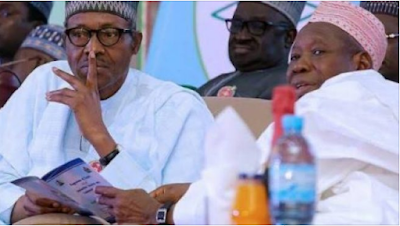 Garba Shehu, presidential spokesman, says the endorsement of Abdullahi Ganduje, governor of Kano, by President Muhammadu Buhari, is not a dent on the administration’s anti-corruption war.

Buhari raised Ganduje’s hands during the All Progressives Congress (APC) presidential campaign rally in Kano on Thursday, signalling an endorsement of the governor’s second term bid despite the corruption allegations levelled against him.

Ganduje was seen in some videos allegedly collecting kickback from some contractors, though the governor denied the allegations.

Many have expressed reservations with the president’s relationship with Ganduje, questioning the depth of Buhari’s anti-corruption crusade.


But in a statement, Shehu said Ganduje is innocent until proven otherwise.

He added that Ganduje enjoys immunity and is free from prosecution based on his status as a sitting governor.

“Some of the suspects being close to the President, he had not shielded them from investigation, administrative suspensions and prosecution,” Shehu said.

“The Presidency added that it is sheer mischief to suggest that President Buhari is shielding anybody because of their closeness to him, explaining that no official under this administration would go unpunished once they break the law.

“On the specific issue of Governor Ganduje of Kano State, the statement noted that Dr. Ganduje, as a sitting Governor, enjoys immunity from prosecution in his own right. Furthermore, under Nigerian laws, a suspect is presumed innocent until proven guilty in a court of law.

“In the circumstances, the matter is in court and the President has no power to dictate to the court or the Kano State House of Assembly, which is already investigating the matter, about what to do with the allegations against Ganduje.

“The Presidency added that it is unfair to ignore the larger picture of the President’s major successes in the war against corruption, including blocking leakages of corruption, which in turn, boosted government revenues.

“The statement challenged President Buhari’s critics to prove that those facing corruption allegations are innocent, adding that the President’s zero tolerance for corruption has boosted and remarkably improved Nigeria’s image in the eyes of world leaders.”