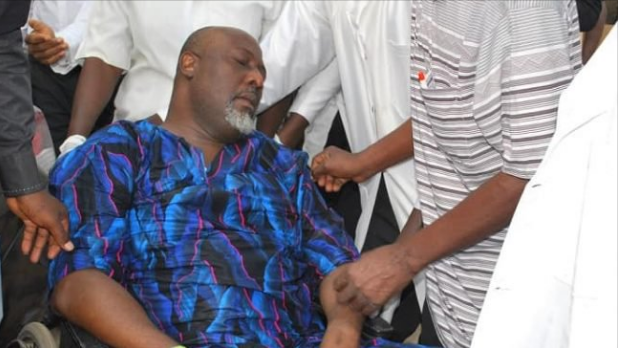 Since he was arrested last week, Melaye has been in a police hospital in Garki, Abuja, after he reportedly slumped.

The senator surrendered to the police following a siege to his Abuja residence which lasted for about eight days.

The police have accused Melaye of culpable homicide and alleged that his supporters shot one Danjuma Saliu, a police officer, in Kogi state on July 19.

Although the senator has been in the hospital since his arrest, the police have said he is fit to stand trial.

According to TheCable, a source revealed on Friday that Melaye is being moved contrary to the advice of some “medical experts”.

The source said there is a probability that he is being taken to Lokoja despite the fact that “the Kogi judiciary is on strike”.

“Experts at the police hospital told them [police] to take him to a more better hospital. They are taking him to an unknown destination and it is against medical advise,” the source said.

“If it is Lokoja they are taking him to, the Kogi state judiciary is actually on strike. They may just arrange for one judge who will listen to them and will remand him in prison indefinitely and that will go beyond election time.”

Another source said: “Police stormed Melaye’s hospital today and they have taken to him an undisclosed location. Nobody knows where they are taking him to.”

If the police are successful, it will be the eighth time Melaye will be arraigned in court.

Another source also claims that suspected masked policemen on Friday invaded the Police Clinic where Senator Dino Melaye is taken treatment and whisked him away to an unknown destination.


He was believed to have been taken to Lokoja, Kogi State, for interrogation over the alleged shooting of one Sgt. Danjuma Aliu by suspected political thugs.

A close associate of the lawmaker, who craved anonymity said Melaye was taken away from the hospital  around 2:15 pm Friday in commando style.

The Force PPRO at Force Headquarters, Abuja, Jimoh Moshood, promised to get back to our reporter when he was called for confirmation of the news.