Police speaks on arrest of Amaechi 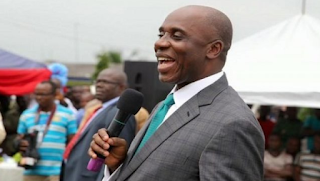 The Rivers State Police Command has denied reports that the former governor of the State, Mr. Chibuike Amaechi was arrested on Wednesday by the new Commissioner of Police in the state, Usman Belel, on allegations of corruption.

This was disclosed in a statement signed by the Command’s Public Relations Officer of Nnamdi Omoni, stating that there was neither investigation of Amaechi, who is now the Minister of Transportation, nor his arrest.

The Deputy Superintendent of Police, Omoni in the statement, urged members of the public to disregard the report as it is targeted at blackmailing the CP.

“That the general public is hereby enjoined to disregard and discountenance the above news report as being mischievous, ill-conceived, diversionary and only intended to undermine the security situation in the State and harass the Nigeria Police Force and the person of the Ex-Governor and Hon. Minister of Transportation.

He further added that the Police Commissioner has ordered for thorough investigation into the said report with a view to bringing any body or group found complicit to justice.