Police nab man for killing wife, children, 4 others in Ebonyi 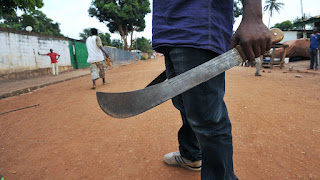 The Police Command in Ebonyi says it has arrested “an insane man“, name withheld, for allegedly killing his wife, two children and four other members of his community in Ebonyi.

The Police Public Relations Officer  (PPRO) for the Command, ASP Loveth Odah, told newsmen in Abakaliki on Tuesday in Abakaliki that the incident was reported to the police on Jan. 21, at 2.p.m.

According to Odah, the suspect is from Onyikwa Community of Ebonyi Local Government Area of Ebonyi.

“The councillor representing the community, Mr Friday Nwigube, reported to the police that an insane man was inflicting machete cuts on members of his community.

“A combined team of detectives rushed to the community where they found several persons with deep machete cuts and rushed them to the Federal Teaching Hospital (FETHA), Abakaliki.

“Seven of them were confirmed dead on arrival at the hospital while four others are in a critical condition,” the police spokesperson said.

Odah said that police detectives and youths in the community had embarked on a manhunt for the arrest of the suspect.

She solicited the support of members of the public to supply the police with useful information that would lead to the arrest of the suspect.

“The police cannot completely eradicate crime in the society, only strive to reduce it to the barest minimum.’’

“The incident reminds us of a similar one at Ishielu Local Government Area, where an insane woman also killed a fellow woman and burnt houses in the community.

“Cases of insanity are not a one-person’s business, communities should send such persons to psychiatric facilities for adequate care,“ she said.