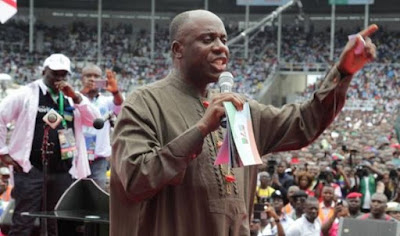 Rotimi Amaechi, director general of the reelection campaign of  President Muhammadu Buhari, on Monday recollected how he went into a 10-month exile in Ghana in 2006 when ex-President Olusegun Obasanjo was in power.

Obasanjo said this at a press conference in Abeokuta, Ogun state, on Sunday.

But Amaechi asked Nigerians to make comparison and discover the truth.

“Honestly I had decided at the campaign rally that because there were too many speeches, I would say very little,” he said.

“But in view of what is going on in the country, I need to make one or two sentences, proceed from that to statements.

“Sometime in 2006, I was chased out of this country by a PDP-led federal government. I went into exile in Ghana. I was in Ghana for 10 months. I was expelled from the party, PDP until I became a governor. And when I became a governor, I told them I did not want to belong to PDP again. They met me and apologised and readmitted me into PDP.”

He asked Nigerians to compare the administration of the Peoples Democratic Party (PDP) to what obtains currently and decide which is closer to Abacha’s government.

“I was a governor in 2013, 2014, 2015—I had no security. A PDP-led government had chased my CSO and my ADC away. My ADC ran to London, my CSO was put in an underground cell. A major who was in my convoy was also put in underground cell. I was left without security.

“They should tell us one governor that is left without security today.”

The former governor accused the PDP of being experienced in rigging elections, citing the south-south region as example.

“PDP knows that we’re all in PDP and that in the south-south they don’t do elections. We write results, no voting,” he said.

“So which one is close to Abacha? The PDP one or the one where we’re saying people’s votes must count? The problem we have in the country is that we’re clearly showing them that it is no longer business as usual. No more rigging.

“There will be no rigging by God’s grace this time. INEC must perform its responsibility to protect our votes, so that the president that emerges will be the people’s president.”