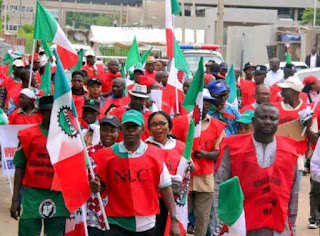 The organised labour said that it would mobilize its members to storm the House of Representatives Public Hearing at the National Assembly complex on Monday.


The organised labour also said it will not accept the N27,000 approved by the National Council of State as the new minimum wage for state government and private sector workers, stressing that whenever agreement was reached in tripartite committee, it always remained so.


The Central Working Committee, CWC, of the Nigeria Labour Congress, NLC, in its resolution after meeting in Abuja told members of the National Assembly to do the needful by upholding the N30,000 approved by email the Minimum Wage Tripartite Committee.


According to NLC president Ayuba Wabba, “The meeting deliberated on one item which is the issue of the transmission of the national minimum wage bill to the National Assembly.

“The meeting reviewed the whole situation including the fact that N30,000 was agreed at the tripartite negotiating meeting to be the minimum wage.


“It was out of place and procedure for that figure to be reduced to N27,000.


Going by the convention of the International Labour Organisation, the figure that was agreed by the tripartite committee cannot be changed by any of the parties except through a process.


“Government as an employer cannot unilaterally change the figure.


“This is about law and procedure.

Therefore, the CWC has frowned on that and rejected the issue of reducing the figure. We still maintain that we stand on the outcome of the tripartite committee.


“We will mobilize our members and engage the National Assembly on the issue. The negotiation must be respected and NASS should do the needful.


“We have put our members on the alert that if that is not done, certainly we will also mobilize to take appropriate action that is desirable to protect and ensure that the tripartite process be respected.


“That has been the process according to the provision of ILO convention on minimum wage mechanism.


“We have also agreed that on Monday, we will mobilise to the House of Representatives during the public hearing on the bill to make sure that the right thing is done.


“The NASS members represent the people and we call on them to respect the outcome of the tripartite process. Importantly, when you look at N30,000, it s a compromised position in the context of today’s economy of Nigeria. We should be commended.


“As far back as 2011, the N18,000 minimum wage was equivalent to $150, today, the N30,000 is less than $100. We juxtapose this argument within the content of reality and demand that what was mutually agreed after all other factors have been put into consideration, including the ability to pay, must be respected.”