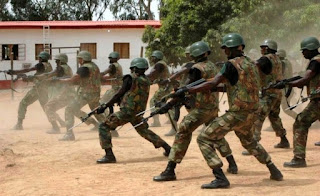 The military has called on traditional rulers and the entire people of troubled North East not to relent in offering assistance that will see an end to the Boko Haram crisis.

The head of the counter-insurgency operation in the North East (Theatre Commander, Operation Lafiya Dole), Major General Benson Akinroluyo made the call on Friday while paying homage to the Shehu of Borno, Alhaji Garbai El-Kanemi.

The spokesman of Operation Lafiya Dole, Col. Onyema Nwachukwu in a press release on Saturday said the visit to the Shehu of Borno was in continuation of the familiarization visit of the Theatre Commander.

He said the Theatre Commander and his principal staff officers were received by the Shehu and members of the Emirate council at his palace in Maiduguri.

Nwachukwu said General Akinroluyo, in his remark, stated that it was customary to pay a familiarization visit to the Shehu to formally announce his presence as the Theatre Commander of Operation Lafiya Dole and to pay his respect to the Shehu, as a custodian of the traditional institution in Borno.

He said, “The Theatre Commander expressed appreciation to the monarch for the support accorded the troops in the fight against terrorism and insurgency since he assumed office and urged the royal father and members of the Emirate council not to relent in supporting the Theatre Command.

“He further noted that security is a collective responsibility which requires the participation of all citizens. He reassured the Shehu of the untiring effort of the Armed Forces towards ensuring enduring peace and stability in the North East.”

He said the monarch responded by expressing his gratitude to the Theatre Commander and his entourage. He also commended the military on its tireless commitment towards ending the lingering insurgency in the North East.

The monarch further assured the Commander of the continuous support of the Emirate council, while praying for the speedy return of peace and stability in the North East and Borno state in particular.