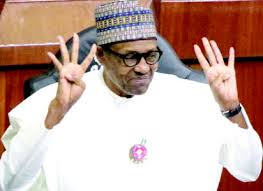 The Coalition of United Political Parties has asked President Muhammadu Buhari not to outsource his campaign to the All Progressives Congress chieftain, Bola Tinubu, if he is fit for the nation’s top job.

The CUPP also accused the APC of plotting to rig the 2019 elections and plunge the nation into avoidable crisis.

Addressing journalists at a news conference in Abuja on Friday, CUPP chairman, Olagunsoye Oyinlola, said Buhari would go down in history as the first President to hire a proxy in a presidential contest.

The CUPP, which consisted of over 46 political parties, said Buhari must debate against its presidential candidate and account for his stewardship to Nigerians.

Oyinlola said, “President Buhari has, indeed, said Senator Bola Tinubu would do the campaigns on his behalf. We hope he was misquoted. Otherwise, Nigerians should simply ask him to step back from the contest and let his party put Tinubu forward as its candidate.

“Buhari would go down as the first candidate in history to hire a proxy in a presidential contest. He is the one contesting, he should not be afraid to be the one to interface directly with Nigerians.”

Oyinlola added, “We urge Nigerians to insist that President Buhari must show that he is fit and able for the nation’s top job by leading his own campaign and by being at the presidential candidates’ debate.”

The CUPP chairman stated that the refusal of the President to sign the Electoral Act Amendment bill into law was part of plans to manipulate the polls.

He pointed out that the amendments were made in order to have better legal frameworks for delivery of free and fair elections, in accordance with Article 6 of the ECOWAS Protocol which states that “The preparation and conduct of elections and the announcement of results shall be done in a transparent manner.”

Quoting Article 2(1) of the ECOWAS Protocol, the former military administrator argued that the amendments to electoral laws could be done “but such amendments must be with the consent of a majority of political actors.

“We, therefore, see the President’s decision not to sign the bill as a direct, open threat to the integrity of the elections and it is not funny.

“We call on him, therefore, to have a rethink and sign the bill into law without any further delay.”