Khashoggi murder: US senator says Saudi crown prince must be ‘dealt with’ 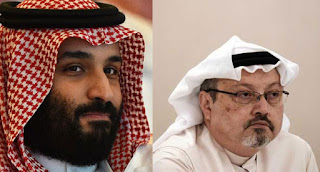 A key US senator on Saturday said the Saudi crown prince was responsible for Jamal Khashoggi’s murder and must be “dealt with”, as he threatened new sanctions.

“I have concluded that the relationship between Saudi Arabia and the United States cannot move forward until MBS has been dealt with,” Graham said, using the initials for the crown prince.

Graham also threatened new sanctions against those suspected of involvement in the murder during a press conference in Ankara.

Western countries including the US, France and Canada have placed sanctions on nearly 20 Saudi nationals as the case has tarnished Riyadh’s international reputation.

“We will start sanctioning those involved in the killing of Mr Khashoggi. We’ll make a definitive statement that MBS knew about it and is responsible for it and come up with a series of sanctions,” the South Carolina lawmaker said.

Turkey says Khashoggi was killed by a team of 15 Saudis who strangled him during a visit to the Saudi consulate in Istanbul on October 2 to obtain paperwork ahead of his upcoming marriage.

The remains of the insider turned critic of the kingdom have yet to be found, three months after this murder.

Riyadh has denied any claims of the crown prince’s involvement but the case has caused strains with Washington.

Earlier this month the trial of 11 accused opened in Saudi Arabia with the attorney general seeking the death penalty for five defendants.

Graham acknowledged that he had been “enthusiastic” in his support of Prince Mohammed but accepted he had been “wrong”.

“What has transpired in the last couple of years is unnerving to say the least,” he said.

Graham said the sanctions were intended to send the message that the murder was “not what you do if you’re an ally of the United States”.