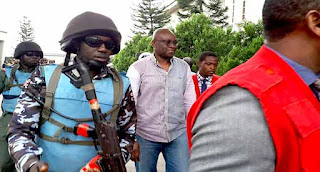 The former minister of State for Defence told the Federal High Court, Lagos that he gave the money to the former governor three days to the 2014 Ekiti governorship election in his hotel room in Ado-Ekiti.

He testified in the ongoing trial of Fayose, who is facing a N30.8  billion fraud charge.

Fayose who was arraigned on October 22, 2018, alongside his company, Spotless Investment Limited, on 11 counts, pleaded not guilty to the charges.

The court had granted him bail in the sum of N50 million with one surety in like sum when the trial commenced fully on November 19, 2018.

At the sitting on Monday, Mr Rotimi Jacobs (SAN) appeared for the EFCC, while Messrs Kanu Agabi (SAN) and Olalekan Ojo (SAN) represented the first and second accused.