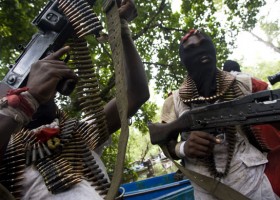 No fewer than three persons were feared dead during an attack by unidentified gunmen on Sunday night between Asso and Tanda bridge in Gwong Chiefdom of Jema’a Local Government Area of Kaduna state.

Mr Peter Averik, Chairman of the Local Government, who confirmed the development to the News Agency of Nigeria on Monday, said the attack took place around 7:30pm when unidentified gunmen opened fire on innocent persons who were walking along the Asso and Tanda bridge.

“I was told the gunmen, who seemed to be advancing, opened fire on the pedestrians over the fear that they may be exposed.

“One person died on the spot while two others who sustained injury were rushed to Fadan Kagoma Hospital where one of them died this morning following the magnitude of injury sustained,” he said.

Averik further confirmed that the third victim’s corpse was found earlier on Monday in a bush path at Wazo village before Aso.

He said arrangement had been concluded to convey the injured persons to Barau Diko Specialist Hospital in Kaduna, following a referral from Sir Patrick Memorial Hospital, Kafanchan.

The chairman said security personnel had since been drafted to the affected community adding that the government would continue to ensure the safety of lives and property.

NAN recalls that 15 persons were recently killed while 17 others were injured when unidentified gunmen opened fire on innocent persons at Ungwan Pa’ah Gwandara village in Godogodo Chiefdom of Jema’a Local Government Area.