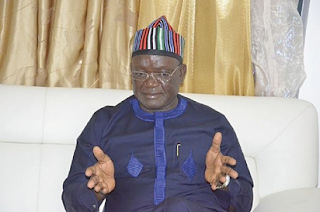 Governor Samuel Ortom of Benue State has said he was ready to waive his immunity to face prosecution if need be, following allegations of fraud levelled against him by All Progressives Congress, APC, in the state.


According to the governor, the current smear campaign against him by the party indicates that the party has lost steam and has nothing to tell the people, ahead of the general elections next month.


Ortom, who stated this at a thanksgiving mass organised for him by Isherev and Utyondu communities in Guma and Makurdi Local Government Areas, described as baseless, allegations that he had defrauded the state government to fund his private business organisations.


He stated that the expansion of the business conglomerate he established before assuming office was being funded from bank loans from Central Bank of Nigeria, CBN, Bank of Industry, BOI, and Nexim Bank.

He said: “Before I became governor, I was a well established industrialist and although I no longer manage the companies, which I set up, they are being expanded with loans obtained from various financial institutions and the records are there.’’


He described as false and mischievous allegations from leaders of opposition political party in the state that he had diverted public funds into his private businesses in Nigeria and abroad.