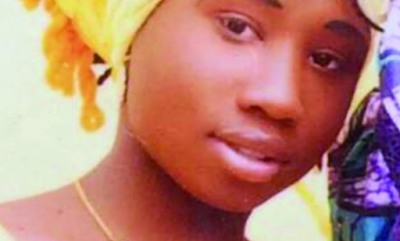 The Coalition of United Political Parties has expressed concern over the Federal Government’s alleged silence over  Leah Sharibu who is still  being  held captive by Boko Haram.

Leah Sharibu was one of the 110 pupils  of Government Girls’ Science and Technical College, Dapchi, Yobe State, abducted by the insurgents in  2018.

The terrorists freed others but held on to  Sharibu because she  refused to renounce her  Christian faith.

The Deputy National Spokesman for the CUPP, Mark Adebayo, told Saturday  PUNCH  on Friday that  she might  be released “a few days to the elections to score a political point”.

He said, “As a parent, I am personally saddened by the manner of the abduction of the Dapchi girls. Politics apart, it was such a poor and fatal attempt at image laundering for a clearly failed government. Till date, the government has not been able to dispel the rumour of its collaborative culpability in the abduction of those helpless kids.

“Any doubts about the authenticity of that allegation and suspicion were removed when the terrorists returned the kids in a convoy ride back into Dapchi exactly 30  days after the abduction.”

He added, “I have a feeling that Leah is being used as a political bait. The government may arrange her f
reedom a few days to the election to score a political point. But it matters not, just get her released and stop behaving like Leah Sharibu doesn’t exist.

“The Muhammadu Buhari government treats Leah Sharibu’s case as closed. That is an extremely unthinkable treachery against a citizen of the Federal Republic of Nigeria.”

Adebayo also faulted what he described the precarious security situation in Nigeria and “government’s cluelessness”.

He said, “The question you should ask yourself is, why do our soldiers have to always be on the defensive while Boko Haram is often on the offensive?”

He added, “Instead of the military high command to launch a massive attack against the terrorists, they are organising a python dance across the country, which is a poorly concealed ploy to use the military to rig the presidential election through voter apathy.

“The open rigging of the Ekiti and Osun states elections is still fresh in our memories, especially the instigated violence that accompanied those elections.”