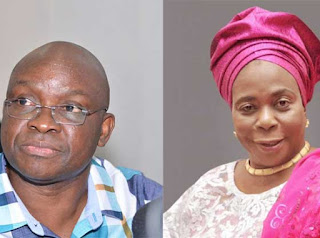 While Fayose, at an event in the Adebayo area of the state capital, inaugurated Chief Dipo Anisulowo as the Atiku Abubakar’s  campaign  council’s director-general, Olujimi, at the Ajilosun area of Ado Ekiti, inaugurated Yinka Akerele as  the PDP’s presidential candidate’s  campaign DG.

However, both sides agreed to a  former deputy governor of the state, Prof Kolapo Olusola, as chairman of the presidential campaign council in the state.

Trouble started in the state PDP when Olujimi on Monday faulted composition of the campaign council published by a  pro-Fayose group, saying it was at variance with what was agreed on at  their  meeting, hence her rejection of the council.

Fayose, who spoke at the event,   said he had been fair to  the  caucuses of  the party in the state  in constituting  the campaign council by allowing caucus leaders to choose representatives to be part of the  team.

He  said, “I won’t ever fight for leadership. It is the people who will identify their leaders. I am not contesting any election.”

But on his part, Olujimi said, “Why we are here is that we are saying that we cannot shift the goalpost in the middle of the game. We are standing by the original list.

“If the party’s  stakeholders met and selected people, no individual, including Fayose, has the right to void same.”

The lawmaker added, “Those appointed have started work. They have even written letters to the state government for the use  of the stadium. They were supposed to have been inaugurated on January 3. Suddenly everything changed and Fayose tinkered with the list.”