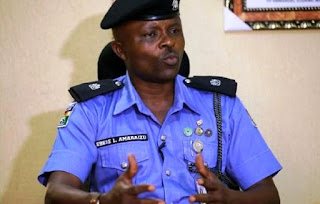 The anti-robbery operatives of Enugu State Police Command have in an overnight operation dislodged a gang of suspected armed robbers, killing one while others escaped with bullet wounds.

The command’s spokesman, SP Ebere Amaraizu, who disclosed this on Thursday said the gang were in the habit of blocking  9th Mile-Udi-Oji River-Awka Road with big stones and woods to enable them rob motorists.

According to Amaraizu, the operatives confronted the armed robbers on the road at 3am at Agungwu, Ugwuoba in Oji River axis of the major road.

He said operatives of the Oji River Division of the command carried out the operation.

“It was, however, gathered that the suspected armed robbers had already formed the said roadblock when through intelligence information, the police operatives swooped on them.

“In the ensuing gun encounter between the police operatives and the armed robbers, one of the armed robbery kingpins (names withheld) from Ebonyi was hit by police bullet which left him fatally injured and he was later confirmed dead on arrival at a nearby hospital by a doctor.

“Other members of his gang, who are believed to also have been harmed by police operatives’ bullets escaped into the bush,’’ the spokesman said in a statement.

Amaraizu said that a manhunt on the fleeing members of the gang had been intensified, while a full-scale investigation had commenced into the incident.

“The command advises members of the public, especially hospital owners and doctors to watch out and report anyone that will approach their medical facilities with a wound suspected to be a bullet wound for necessary action.

“Police operatives are now conducting a search for the fleeing members of the gang everywhere within Oji River and its environs,’’ the spokesman added.