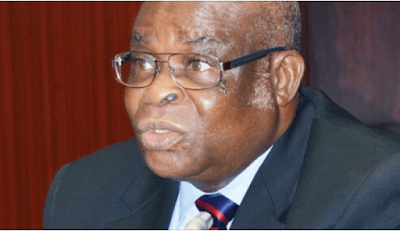 The Coalition of United Political Parties, CUPP, has alleged that the Minister of Transportation, Chibuike Amaechi and Governor of Kaduna State Nasir El-Rufai are sponsoring the plot to arrest and remove the Chief Justice of Nigeria, NJC, Justice Walter Onnoghen on Tuesday.

The opposition coalition alleged that the plot was concluded in a meeting held in Abuja, Thursday night by the cabal in government, led by Amaechi.

Reading a prepared text before newsmen in Abuja, through its 1st National Spokesperson, Ikenga Ugochinyere, the body alleged that Justice Danladi Umar was specifically directed to ignore last week’s court orders which restrained the federal government through its agents from arresting the CJN pending the determination of the case.

It alleged that the cabal planned to name the Deputy Chairman of the National Judicial Council, Justice Mohammed Tanko as the acting Chief Justice of Nigeria once Onnoghen was arrested.


CUPP also alleged that the Buhari led-APC was intimidating NJC members to move against CJN Onnoghen and pave way for Tanko Mohammed, vowing that the opposition would” fight till the end and frustrate APC plot to annex the Supreme Court .”

CUPP said “the CJN can only be removed in line with section 292 of the constitution.”

The CUPP added, “It with a heavy heart that we have summoned you today to notify the world that democracy is in clear and present danger in Nigeria. The cabal of the Presidency have just concluded a meeting last night where they have now set the stage to burn down the institution of democracy and constitutional governance for the purpose of achieving a narrow aim of annexing the judiciary.

“Just few hours after our release of the secret letter directing the freezing of the account of the CJN illegally without a Court order, these men have at the end of their meeting last night directed the Chairman of the Code of Conduct Tribunal, Mr. Danladi Umar to disregard the Order of the Federal High Court, Abuja which has directed the Tribunal to maintain status quo and go ahead to issue a bench warrant on the next adjourned date being Tuesday the 22nd January, 2019 in the event the CJN does not appear in Court.

“The meeting of the Presidency cabal also resolved and directed the new Ag. Inspector General of Police that the immediate arrest of the CJN on the same Tuesday as effort will be made to ensure he is served with the order same day, following the issuance of the arrest warrant would be his litmus test for his speedy confirmation as the substantive Inspector General.

“They further resolved that another petition would now be forwarded to the National Judicial Council and that petition has already been drafted in the Chambers of a Senior Advocate of Nigeria. This petition will precede the other frivolous and trumped up allegations which will be submitted against Justice Mary Peter-Odili, Justice Cletus Nweze and Justice Rhodes Vivour just to scare them away and tarnish their good names.

“The President has weaponized his failed fight against corruption. The Chairman of the Code of Conduct Tribunal was once again reminded of his pending criminal charges and conscripted that as long as he issued the arrest warrant nobody will move against him. Nigerians, the said charges against the Chairman of the Tribunal has already been filed and is being handled by the Spokesman of the Buhari Campaign Organization, Mr. Festus Keyamo. This is a copy of the charge already filed.

“Let it be known that unless and until the CJN is found guilty by a court of competent jurisdiction, he will not resign! Know ye all men and let the lips of the opposition be read clearly; and let the ears of President Muhammadu Buhari open and hear this: Amechi, Malami, El-Rufai, Boss Mustapha and other members of the cabal that are sponsoring this inglorious offensive against the judiciary in a bid to turn it into an appendage of the APC will fail. We will resist this attempt.

“This is the bridge and it must not fall, we cannot retreat beyond this point and Justice Walter Onnoghen will not be illegally removed from office. God forbid! God forbid!! God forbid they succeed.

“They want to force him out at all cost and put an acting CJN who’s bidding will include setting up appeal panels to resolve the Rivers and Zamfara APC crisis in favour of the APC and the other States where they fear they will lose elections including Akwa Ibom State, Delta State, Lagos state, Benue State, Imo State, Kwara State, Plateau state, Kaduna State, Abia State and Sokoto State and also constitute a pro Buhari post presidential election Tribunal.

“The CJN may not speak out because of the demands of his office but we will not as the opposition, the bearers of the conscience and consciousness of the Nigerian people keep quiet and allow these felons to desecrate the Nigerian judiciary.

”The only way the CJN can leave office is by Section 292 of the Constitution or by a proper conviction and not by stepping aside from the NJC. We are shouting it from the roof tops; let them put the CJN in handcuffs, let Danladi Umar in dancing to the tune of his APC blackmailers and issue arrest warrant, let the IG dance to the tune of the litmus test of arresting the CJN, let the APC funded petition be brought to the NJC, Justice Onnoghen will not be forced out of office.

“Furthermore, there is also an ongoing pressure on the members of the NJC and moves to conscript them to force the CJN out of office. Nigerians must rise now before this final bridge of the semblance of constitutional governance falls. Once again we shout; if you are sleeping- wake up; if you are eating- stop; if you are playing- stop; the enemies have gotten to the last bridge and it is either we stop them or we lose our country.

“We must all stand up now. The court is the last hope of the common man, if they take over we shall be made slaves in our fatherland and the fundamental rights of citizens will become luxury.

“We call on the Nigeria Bar Association to take up this matter and speak on behalf of the Bench. Progressive and conscious lawyers should all march to the Tribunal on Tuesday and stand shoulder to shoulder with the opposition to salvage the conquest of the judiciary from anti-democratic forces.”