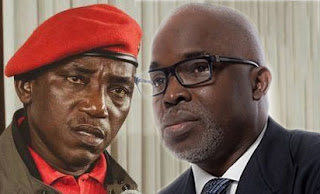 Nigeria Football Federation has described reports in a section of the media about President Muhammadu Buhari calling for the prosecution of NFF president, Amaju Pinnick as blatant falsehood meant to throw the country’s football into fresh round of crisis.

Dalung and Amaju Pinnick Various on-line and regular media have reported detailed accounts of financial misconduct following the release of the NFF financial reports for the year 2018.

The attention of the Nigeria Football Federation has been drawn to a news item circulating in a section of the media saying a directive has been issued by President Muhammadu Buhari that the President of NFF, Mr. Amaju Melvin Pinnick be prosecuted and that Pinnick has also been issued with a travel ban.

The report is completely unfounded and is only a product of the writer’s imagination. The NFF President, who is also the 1st Vice President of the Confederation of African Football, has not received any such message from any of the agencies mentioned by the writer and has also never been placed on travel ban.

Mr. Pinnick was in Accra, Ghana on Friday, 4th January 2019 for a meeting with NFF and CAF partners AITEO and returned to Nigeria the same day. He has been going about his lawful official and private activities unhindered. The NFF published its audited account in major national newspapers on Thursday, 20th December 2018 and on Tuesday, 25th December 2018. Anyone interested in the Federation’s financial transactions can refer to those pages.

All incomes into the NFF from the Federal Government, FIFA and CAF from 2014 till now have been correctly recorded and reflected in our accounts. The NFF received nothing like the N59 Billion that the fake news reporters have been hawking. It is laughable.

Our lawyers will take up the matter of the fake news item with the newspaper company that first published it in its online edition. But we urge other media companies and outlets to be painstaking in verification of their news items.

We also urge our sponsors and partners, football stakeholders in Nigeria, Africa and the world at large, and other media institutions to disregard the said news report as its another attempt by the mob against the NFF to tarnish the image of the Federation and its leadership for whatever gains.