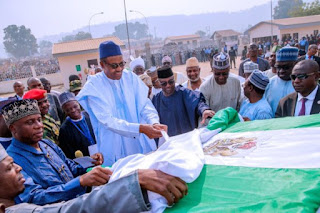 The contract, costing N6billion, was originally awarded in 2011/12, then abandoned, until Buhari’s government forged ahead to deliver it.

“It is also equipped with facilities such as water hydrant system, water treatment plant, reach stacker, 100KVA power generating set and three forklifts of various tonnages, among others.

“Baro Port is one of the river ports being built by the Federal Government to support the dredging of the Lower River Niger project.

“The Baro river port is expected to create at least 2,000 direct jobs and hundreds of thousands indirect jobs.

“It will help keep off the road several heavy duty trailers and trucks, thereby extending the life span of our roads,’’ Fadile said in a statement.

He said that NIWA had started upgrading the road network linking the port.