Bayern to appeal as Mueller suspended for Liverpool tie 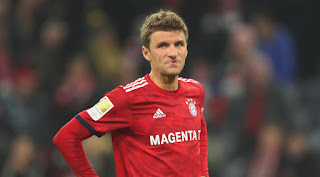 Bayern Munich said on Friday they will appeal the two-match Champions League suspension handed to Thomas Mueller which means the Germany international will miss both legs of their last-16 tie against Liverpool.

European football’s governing body UEFA handed Mueller a two-match ban on Friday following his sending-off in the 3-3 draw away to Ajax in their final group game last month.

Mueller was shown the first straight red card of his career for kicking Ajax defender Nicolas Tagliafico in the head.

The 29-year-old will definitely miss the away leg at Anfield on February 19, but Bayern hope a successful appeal would mean Mueller could play the return at the Allianz Arena on March 13.

Mueller apologised following the sending-off, insisting he meant to kick the ball.

“No, no, of course, I didn’t mean to do it. It wasn’t intentional,” Mueller told reporters, but Bayern coach Niko Kovac said the red card was the correct decision.

Mueller has five goals and six assists in 25 matches in all competitions this season.

Like Mueller, Ajax midfielder Maximilian Woeber has also been given a two-match suspension for his horror tackle, in the same game, on Bayern’s Leon Goretzka which also led to the Austrian international being shown a straight red.

Woeber will miss both legs of Ajax’s last-16 tie against holders Real Madrid.