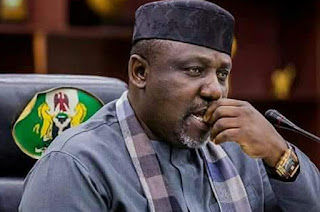 The National Working Committee of the All Progressives Congress has removed the Imo State Governor , Rochas Okorocha , as the state coordinator of the party ’ s campaign council .


The decision followed the recommendation of the disciplinary committee set up by the Imo APC over allegations of anti - party activities levelled against the governor and others.


The committee chaired by Mathew Omegara had earlier summoned the governor and six others to appear before it.


The National Publicity Secretary , Mallam Lanre Issa- Onilu , had said the National Working Committee of the party would meet to consider the Imo APC recommendation that Okorocha should be suspended .

“ What has happened in Imo shows that the APC means business . Once they have complied with all the rules, no problem . When they bring the recommendation to the NWC , we will look at it, ” he had said .


But a member of the Imo State chapter of the APC told our correspondent on Sunday that Okorocha had already been removed by the NWC as the campaign coordinator of the party .


Okorocha had vowed to work for his son - in - law , who is the governorship candidate of the Action Alliance , Uche Nwosu , against the APC candidate , Senator Hope Uzodinma .


The member said , “the party has already removed Okorocha as the coordinator and directed Uzodinma to take over the campaign council . During the visit of the wife of the President to the state for campaign , the governor invited his son - in - law to the stage and raised his hands up . This jolted many of us who saw it as an affront to the President ’ s wife and the party . ”


He however said the case of the Ogun State Governor, Ibikunle Amosun , had not been considered by the party .
When contacted for verification on Sunday , Issa- Onilu said the removal of Okorocha was instant since his suspension came from his ward .


He said the implication of Okorocha ’ s suspension was that he could no longer function as the state coordinator .


They had reported that the party would query Okorocha over his alleged anti - party activities.


The NPS had said the party should be commended for promoting internal democracy .


“ The party should be appreciated that it is possible to query a governor and recommend him for suspension , ” he added .