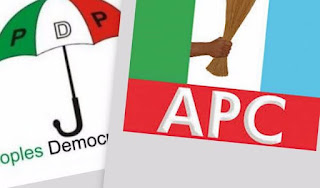 The All Progressive Congress (APC) and Peoples Democratic Party (PDP) are trading words over alleged destruction of campaign banners and posters.

The two parties accused each other of violation of the peace accord earlier signed by their representatives.

“We noticed with dismay the ongoing operation of removing PDP’s posters and banners in Kano metropolis.

“Some of our supporters were reportedly attacked within the city centre by thugs who are believed to be sponsored by APC and Kano State Government in preparation for presidential visit tomorrow,” he alleged.

Dawakin Tofa urged both supporters of People’s Democratic Party (PDP) and Kwankwasiyya movement in Kano to remain calm and avoid all places where APC is visiting tomorrow.

In a swift reaction, the state Commissioner of Information, Malam Muhammad Garba, disputed the allegation, saying the Kwankwasiyya group was only raising a false alarm to divert attention and wash off its hands from the group’s widely publicised attacks on residents during its political rally in Kano Municipal and Tarauni local government.

Garba said Kwankwasiyya was troubled by inundated media reports in radio and newspapers on how its members, brandishing dangerous weapons, unbridled trepidation on residents in some parts of the metropolis by destroying vehicles, motorbikes and assaulting innocent citizens.

“We have resisted the temptation to dismiss these false alarm as mere distraction common during electioneering.

“However, we are mindful of this deliberate plot by the group to instill fear in the minds of residents by unleashing violence on the state and portray the APC in a bad light.

“It is really unfortunate that the group has resorted to violence. They do not want the peaceful political atmosphere that has been entrenched by the present government in Kano state because we allow the opposition to thrive, and we don’t go against anybody. Our campaigns are based on issues,’’ he said.