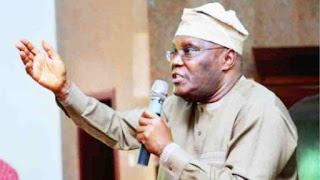 The presidential candidate of the PDP, Atiku Abubakar, has accused the APC-led Federal Government of “engineering a needless crisis” in the country.

Atiku who addressed a press conference yesterday in Abuja, said the President Muhammadu Buhari-led government, which he described as “anti-democratic”, must be voted out of power on February 16, for Nigeria to reclaim its lost grounds.

Atiku, a former vice president, said the “unlawful removal” of the Chief Justice of Nigeria, Walter Onnoghen, by Buhari was an action which constituted a flagrant breach of Nigeria’s constitution and a frontal assault on the nation’s democracy.

He said Nigerians had been brought to a perilous situation under the present government where court orders and constitution were thrown to the wind.

“Yet again, our dear country is passing through a difficult moment. How we react to this challenge in the following days will determine the fate of our democracy, which has been brought to great peril by this needless crisis engineered by a government that is unwilling to subject its conducts to the requirements of our constitution,” Atiku said. “The serial disregard of court orders and consequent violation of constitutionally guaranteed human rights of our citizens confirm beyond all doubt that Gen. Buhari and his government would rather obey their own whims and operate by separate rules outside the well-established constitutional order and the rule of law.

“It scarcely requires emphasis that this behaviour is alien to democratic rule and more in line with that of a military dictator.

“Without a doubt, the fight against corruption is crucial to good governance and the progress of our country. In this context, the issue of corruption as it relates to the institution of the judiciary is even more crucial.

“As the last refuge of the common man, our judiciary must not only be above suspicion but must also be seen to be manifestly above board. The issue at stake is not whether the chief justice is guilty or not, but whether his removal from office has been done in accordance with the process specified in our constitution.

“As a democrat, I must say, without equivocation, that no mission or goal, no matter how noble or well-intended, should be used as a pretext for the subversion of our democracy and our democratic institutions,” he said.

National Chairman of the PDP, Prince Uche Secondus, a former Senate President, Adolphus Wabara, and a former Governor of Cross River State, Liyel Imoke, were among many PDP stalwarts at the press conference.