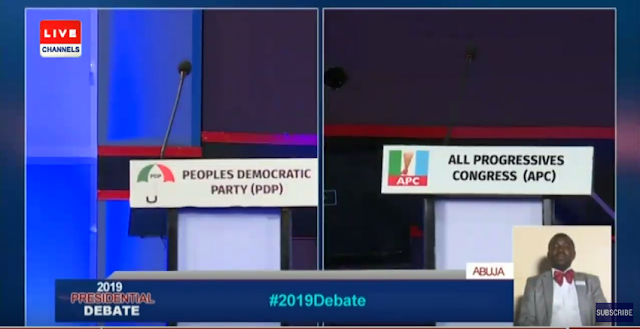 Nigerians on social media have condemned the decision of the presidential candidates of the All Progressives Congress, President Muhammadu Buhari and that of the Peoples Democratic Party, Atiku Abubakar not to participate in the ongoing presidential debate organised by the Nigeria Elections Debate Group and the Broadcasting Organisations of Nigeria.

APC’s Buhari and PDP’s Atiku Abubakar were both absent from the debate.

Explaining the reason for not participating in the debate, Atiku blamed the absence of Buhari, saying it was unfair to attack a man, who was not present to defend himself.


His decision to walk out on the debate as well as Buhari’s absence has led to lots of reactions from Twitter users.

Most Twitter users blasted the duo for disrespecting the electorate, while some believed that Atiku could have taken advantage of Buhari’s absence to shine at the debate.


In my opinion, all candidates should have boycotted this #2019debate until Buhari decides to show up. President Buhari has over time shown gross disregard for the people of Nigeria & this needs to stop. I do not blame Atiku one bit for not coming on. #Presidentialdebate2019
— FAVOUR ONYEOZIRI (GCFR) (@Rouvafe) January 19, 2019


Atiku’s advisers didn’t get this move right at all. This was your “See I’m here, I care, I feel your pain, I can hear you, the President couldn’t be bothered” moment and you blew it. #2019Debate 🇳🇬
— Wale Gates 🇳🇬🇬🇧 (@walegates) January 19, 2019


We are watching a Presidential debate that was boycotted by the sitting president, and during a break, we are served with a campaign ad for his re-election.


To every Nigerian blaming Atiku for leaving #2019Debate venue, I have a different opinion.

I'd have preferred to see all the candidates leave the venue and agree to a debate until President Buhari show up.


Why do you want to lead 200 million people when you don't have the mental reach or intellectual capacity to answer questions on the economy, security, healthcare and education? #2019Debate
— Dr. Dípò | The Career🔌 (@OgbeniDipo) January 19, 2019


This debate was not just an opportunity to attack the incumbent but to sell your candidacy to the people.

There’s no sense behind Atiku walking away from the debate using the excuse of Buhari’s absence.

Well, Atiku said he does not believe in attacking a man who is NOT here to defend himself, and I agree. Makes no sense to be questioning the policies of this government when the president is not there. At least he showed up, #WhereIsBuhari?#2019Debate
— Chidi Okereke (@Chydee) January 19, 2019


President can’t speak on Live TV, his biggest opponent is on an ego trip. What a disgrace. This is why the bar to run for President is Sec school certificates. They don’t care about those of you who have the privilege & time to question them. #2019Debate #2019PresidentialDebate
— That Andy (@AndyMadaki) January 19, 2019