2019 elections: Ohanaeze’s endorsement of Atiku is not acceptable —Kalu 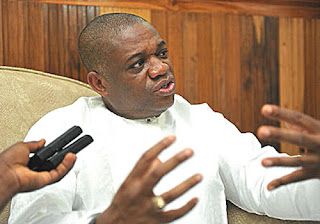 Kalu expressed his disappointment with the group on Sunday in an interview with newsmen in his Camp Neya country home in Igbere, Bende Local Government Area of the state.

He said that the Nwodo-led executive of the organisation betrayed the people’s trust and exposed the body as being partisan.

“Ohanaeze is a socio-cultural organisation and so should not be seen to be partisan. What the leadership did by endorsing Atiku was not in the interest of the Igbo nation.

“The endorsement also did not enjoy the support of the majority of members but may be a committee’s decision,” he said.

Kalu described the endorsement as wrong and capable of decimating the organisation into two factions, if not rescinded.

He said, “I was very surprised that Nwodo, whom I have a lot of respect for, could do such a thing because that is not the right thing to do.

What they just did implies that we have two Ohanaezes, or we are going to have another organisation in a different name.

“I will be in consultation with Governor Willie Obiano of Anambra State and other people of goodwill to decide what we will do next, we are not going to accept it.

“These are card-carrying members of PDP, they cannot use Ohanaeze platform to endorse any candidate, it’s not acceptable to us.

“We want a level playing ground. I expected Ohanaeze to be neutral, whoever wins, they should support.

“I’m not even expecting them to endorse Buhari, we want them to be neutral because neutrality is the hallmark of every independent cultural association,” Kalu said.

The former governor dismissed the fear that the endorsement would sway the voting pattern in the South-East against President Muhammadu Buhari.

He said that South-East APC had begun an intensive campaign in churches and communities to showcase the president’s performance in the zone in just barely four years of his administration.

He further dispelled the speculation that the president hated Ndigbo, saying that Buhari had done for the area what PDP government could not do in their 16 years.

He cited the ongoing rehabilitation of the Enugu-Port Harcourt Expressway, Enugu-Onitsha Expressway and the construction of the second Niger Bridge as some of Buhari’s major projects in the area, to buttress his point.

He said, “I don’t know why people always say that Buhari hates the Igbos because I know Buhari very well. He is a friend to Ndigbo. Am I not a friend to President Buhari?

“I know that on February 16, Abia will give him more than 85 per cent of their votes.”

Kalu, who is the APC candidate in Abia North Senatorial District, expressed great confidence that the party would have a landslide victory in all the elections.

“The party has the antidote against rigging,” he said, adding that the party also had what it takes to win the polls at all levels in 2019.

“We will never allow anybody to rig us out in Abia again. We shall match them force by force and money for money,” he said.

He gave assurance that he would pursue the enactment of bills that would help to transform the nation’s economy, create jobs and ensure agricultural revolution in all the states of the federation if elected.